I still miss it.

There have been some great TV shows in recent years but somehow, it's pretty impossible to rival Sex and the City.

Carrie, Samantha, Miranda and Charlotte had some gas times and we all wanted to live their lives, drinking Cosmos and buying shoes, even if there was a fair bit of heartache along the way. 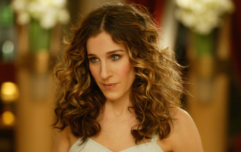 Carrie Bradshaw would be mad for these €60 River Island shoes

END_OF_DOCUMENT_TOKEN_TO_BE_REPLACED

The show had such a huge fanbase that every time there's a rumour about a reboot, people freak out even if that dream hasn't quite been realised yet.

In a recent interview with The Edit, Net-a-Porter's magazine, Sarah Jessica Parker spent a day with the team as she prepared to launch her shoe line on the luxury shopping site.

During the conversation, SJP revealed that she has one major regret from her time on the show and it's one we can all identify with.

"I should have photographed every fitting of Sex and the City; every shoe I ever tried on anywhere in the world ever!

Given the fact that Carrie had the most amazing wardrobe ever in the show, it's no surprise that she wishes she had a personal memory bank of all those fabulous ensembles.

popular
Irish girls name was the most used Irish name in the United States last year
Love Island’s Afia explains why Gemma’s dad has not been mentioned on show
Love Island fans react to "confusing" recoupling
This is the easiest way to determine you may have VIKING heritage
Why Are Men so Obsessed With Boobs? The Answer is Pretty Surprising...
Two of the Peaky Blinders gang are actually brothers in real life
Love Island fans are scratching their heads after finding Tasha's maternity photoshoot
You may also like
1 week ago
Kim Cattrall is returning to our screens in new Netflix show all about the beauty industry
2 weeks ago
And Just Like That writers say Samantha Jones will feature in season 2
1 month ago
Sarah Jessica Parker says she has not spoken to Chris Noth since sexual assault allegations
1 month ago
Kim Cattrall has finally shared her thoughts on And Just Like That...
4 months ago
Sarah Jessica Parker finally opens up on Kim Cattrall's absence from And Just Like That
4 months ago
SATC fans emotional over hidden tribute to Willie Garson in bar mitzvah scene
Next Page