"I think that something magical happens to brides on their wedding day that just transcends the dress."

So says Don O'Neill, the Kerry designer behind international bridal wear line THEIA Couture. "They are surrounded by love and joy and excitement, and they just shine from the inside out," he continues. "That's what Theia is – the goddess of light."

The deity was certainly looking down on Gráinne Seoige, who looked like a goddess herself on her wedding day in December 2019. The broadcaster was, of course, dressed in a design by Don when she tied the knot to South African businessman Leon Jordaan in an intimate ceremony at the Cliff at Lyons.

The flowing bridal gown, embellished with lace and beading, was custom designed for Gráinne.

"I drew all of those curves and lines for her dress – it was like I was drawing on her body with a pencil! Of course, Gráinne is based in South Africa and I'm in New York, so that was a bit of a challenge. We were sending muslins in the post! Gráinne is a friend so she came here and stayed with us for a week, so we were able to fit the finished dress for her. She only saw it for the first time when it was finished." 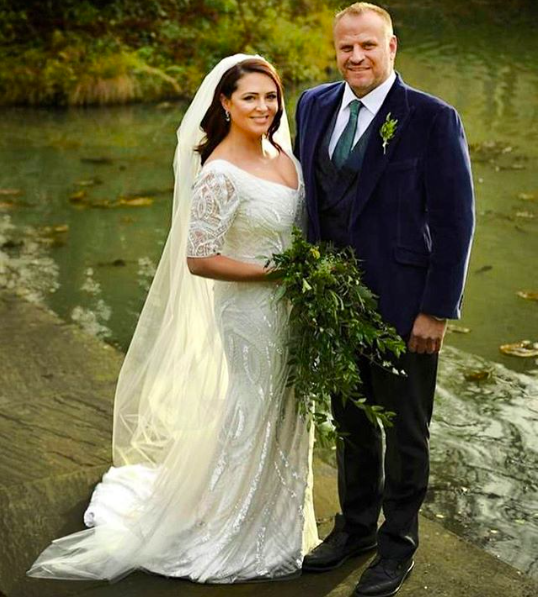 Don's latest THEIA collection centres on crepe and satin dresses with clean lines, but for Gráinne's December wedding something more embellished was called for. He says that it was easy to create a piece for a woman who has such a clear sense of her own style.

"Gráinne is a woman who knows her body and what looks good on her. She's got a gorgeous hourglass figure and she's comfortable in her own skin. Gráinne is body conscious when she dresses – she wants to be sexy without being revealing. Her style is elegant and sophisticated, and so she'd worn my beaded dresses before for events."

Not only did Don provide the dress, but he and husband Pascale who are close friends's of Gráinne's, flew in for the ceremony.

"The dress was just stunning on her, she brought her own bit of magic to it and it just transformed when she put it on. I was fixing the dress just before she went up the aisle and I was in tears."

My trip to NYC has come to an end and I leave with a huge smile on my face having made some great memories. I also have had custom designed for me - the most beautiful couture gown I have ever seen - by one of the most talented and wonderful people in fashion @dononeilldesign Thank you to the wonderful team @theiacouture and of course merci mille fois to the gorgeous @fleurdepascalny I think it’s fair to say I❤️NY #weddingdress #theiabridal #gracediamonds #feelingthelove

The designer will be jetting back home on March 6 for the annual Irish Fashion Collective Show at City Hall. Held in aid of dementia care at St Joseph's Shankill, the show will feature Don's designs alongside those of the likes of Paul Costelloe and Louise Kennedy.

Don will be doing personalised sketches of the guests on the night. He says that it's an honour to be asked to help such a wonderful care facility. "It's so important for families of those suffering from this difficult and tragic disease to know that their loved ones are loved and taken care of ."

Tickets for the event cost €100 and can be purchased here.

popular
'Beard-baiting' is now apparently a dating trend - and we're all for it
Will there be a second season of Gilmore Girls: A Year In The Life? Here's what we know
Curtain bangs are trending - here's everything you need to know
Gwen Stefani reportedly pregnant with baby number four
QUIZ: How well do you really remember the first episode of Sabrina The Teenage Witch?
Kate Middleton has addressed the rumours that she's pregnant with her fourth child
All of the Love Island couples that are still together (and those that aren't)
You may also like
8 months ago
Monsoon has launched a collection of affordable wedding dresses, and they're dreamy
9 months ago
The gorgeous wedding dress trend that's guaranteed to prove popular with 2020 brides
10 months ago
Grainne Seoige spills details about her wedding dress on the lead up to her big day
11 months ago
Rafael Nadal got married at the weekend, and his bride looked like a full on PRINCESS
11 months ago
Kate Wright and Rio Ferdinand got married last week, and the wedding dress was UNREAL
11 months ago
Wexford hurling manager Davy Fitzgerald got married this weekend, and his bride's dress was STUNNING
Next Page