Amy Schumer has uterus and appendix removed due to endometriosis

Amy Schumer has revealed she had her uterus and appendix removed as a result of her struggle with endometriosis.

The Trainwreck star took to Instagram on Saturday to share a short video from her hospital bed telling her fans that she had undergone surgery and was recovering.

END_OF_DOCUMENT_TOKEN_TO_BE_REPLACED

“So, it’s the morning after my surgery for endometriosis and my uterus is out,” she said. “The doctor found 30 spots of endometriosis that he removed. He removed my appendix because the endometriosis had attacked it.”

“There was a lot, a lot of blood in my uterus and I’m, you know, sore and I have some, like, gas pains.”

END_OF_DOCUMENT_TOKEN_TO_BE_REPLACED

The 40-year-old also shared a mirror selfie of herself wearing a hospital gown and blue gloves with the caption: “If you have really painful periods, you may have #endometriosis.”

Many took to the comments to praise the actress for raising awareness around the topic.

“Thank you so much for sharing your endo story. Over 200 million women worldwide suffer with this. Hope you feel better soon!” wrote American TV host and model Padma Lakshmi.

Schumer has spoken openly in the past about how endometriosis affected her fertility, leading to her undergoing IVF treatments, which left her “really run down and emotional." 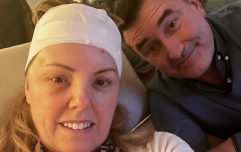 END_OF_DOCUMENT_TOKEN_TO_BE_REPLACED

Endometriosis is a painful condition where tissue, like the lining of the womb, starts to grow in other places – such as the ovaries, fallopian tubes, and the lining of the stomach. For many women, the condition can have a significant impact on their life - sometimes leading to depression.

The most common symptoms include painful period cramps, heavy menstrual bleeding, and pain during or after sex.

According to The Endometriosis Association of Ireland, one in ten Irish women suffer from the condition.

Head over here for more information about endometriosis.

popular
Here's who Yvonne Connolly wants Jack Keating to couple up with
Yes, Ronan Keating's son is entering the Love Island villa
10 stunning and affordable outfits that are perfect for a summer wedding
Love Island's Gemma finally tells villa about dad Michael Owen on TV
Irish girls name was the most used Irish name in the United States last year
Rachel Stevens has split from her husband just weeks before their 13th anniversary
Parent's Benefit Leave in Ireland is being extended from today - here's what you need to know
You may also like
1 day ago
First Dates' Merlin thanks fans as he returns home from hospital
1 day ago
Vicky Phelan shares message of support with Charlie Bird as she deals with pain
4 days ago
Parents call for babies to be tested for rare muscle condition
1 month ago
WHO issues monkeypox warning ahead of festival season
1 month ago
I tried this morning wellness routine for a month – and I feel better than ever
1 month ago
WHO advisor identifies possible source of Monkeypox outbreak
Next Page