He has revealed ALL.

While people were flabbergasted that Taylor could move on so quickly, many were left wondering what caused the sudden split between Taylor and Calvin considering they spent a grand total of 16 months together (which equates to a decade in Hollywood years).

Following rumours from both the Swift and Harris camps on who did the dirty, news was uncovered that Taylor wrote Calvin's latest hit This Is What You Came For, causing people to flee to support Team Taylor.

But today's latest barrage of tweets from the Scottish DJ has uncovered his side to the story, clarifying that while she did write the song under a pseudonym (at her own request), he made it clear he wasn't going to take any more trash talk about his music. 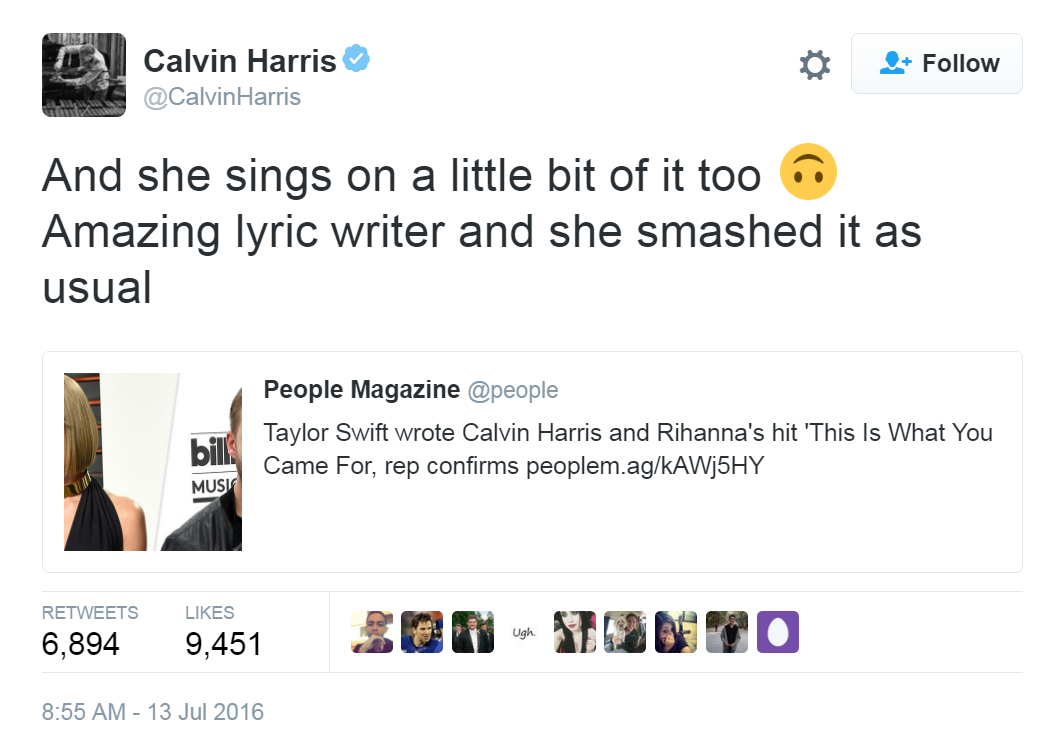 Calvin threw serious shade at her new relationship with Tom Hiddleston, insinuating that her team's actions to make him look bad were petty.

He then confirmed Taylor's rumoured dislike of singer Katy Perry, painting her as well... A bit of a bitch really.

He finished his rant on a slightly patronising note, telling her to focus on positive things rather than rehash the past the pair spent together.

We definitely don't ever want to get on the wrong side of Calvin.

popular
Boyzone's Keith Duffy set to for the next I'm a Celeb Get Me Out of Here
The Body on The Cube has finally been unmasked after 11 years
"80% of my body was covered:" LeAnn Rimes on life-long Psoriasis battle
Bake Off's Noel Fielding welcomes second child, names her 'Iggy'
Little Mix's Perrie Edwards tears base of spine in horrific injury
Kanye West presents Kim Kardashian West with hologram of her late father as birthday gift
Here's what happens on every day of your menstrual cycle (roughly)
You may also like
8 months ago
There's a Taylor Swift club night happening in Dublin next month and we'll see you there, yeah?
9 months ago
WATCH: Turn on your party shoes, the trailer for Taylor Swift's Miss Americana is here
9 months ago
'Really hard' Taylor Swift reveals mother's brain tumour diagnosis
9 months ago
Taylor Swift's Netflix documentary is dropping at the end of the month
10 months ago
Cats movie review: Far from purrfect... but not a complete cat-astrophe!
10 months ago
Taylor Swift calls out 'toxic male privilege' of music industry in empowering speech
Next Page