We've always known that Cameron Diaz is a girls girl, so it should come as no surprise that one of the first rules of spending time with the Hollywood lady is to NOT diss her BFF.

Diaz made an appearance on the Kyle & Jackie O show on Australian radio KIIS 106.5 this week as part of the promotional tour for her new film Sex Tape, but it didn't last too long after presenters made a dig at Drew Barrymore.

It all went downhill after host Jackie O commented that the actress who plays Cameron's daughter in the film, Giselle Eisenberg, reminded her of Barrymore's younger years, notably her character in beloved children's movie E.T. The Extra-Terrestrial.

Cameron agreed, saying: "She does, now that you mention it. And she's as bright and lively as Drew is, as well. She's a sweet little girl." 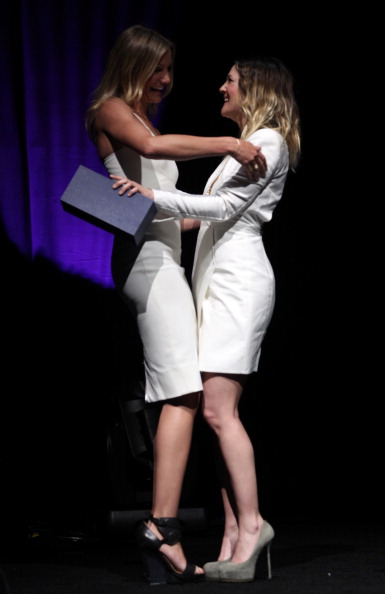 BFFS - Cameron and Drew have been close friends for years

Fellow presenter Kyle Sandilands added a sour note, however, commenting: "Let's hope she misses out on the Drew Barrymore drug years, because those were a great thing to watch, but not so good to be in, I'd imagine."

END_OF_DOCUMENT_TOKEN_TO_BE_REPLACED

Barrymore had a famously troubled upbringing, and best friend Cameron was very quick to jump to her defence.

The actress shot the comment down, saying: "I'm sure, Kyle, you've never been through a drug phase, have you? Or alcoholism or anything like that? Pretty clean… always did it right? Congratulations."

Kyle attempted to smooth over the jibe by bringing up his friendship with Cameron's boyfriend Benji Madden, but the Charlie's Angels star was having none of it and called an end to the interview.

popular
5 new additions to Netflix to spend your weekend watching
Irish teacher Lucy Lanigan-O'Keeffe is engaged Prince William's best friend, Thomas van Straubenzee
Love, Guaranteed is the romantic comedy we never knew we needed
Someone has ranked the penis size of men from all over the world
Staycation: 5 incredible Airbnbs in Ireland to check out for the perfect getaway
Here's what happens on every day of your menstrual cycle (roughly)
Here's the average age people lose their virginity around the world
You may also like
1 year ago
Turns out, this colour of wine gives you the WORST hangover
4 years ago
Lily Allen has revealed that she was stalked for seven years
4 years ago
Pretty Little Liars actor Brandon Jones could be facing over five years in prison
4 years ago
Gwen Stefani Receives Massive Backlash After "Insulting" April Fools' Prank
4 years ago
Katie Price Names And Shames The Twitter Trolls Bullying Her Son Harvey
4 years ago
Kim Kardashian Blasts "Body-Shaming and Slut-Shaming" In Brilliantly Honest Post
Next Page