Chrishell Stause addresses "confusion" around her relationship with G Flip

"I am attracted to masculine energies, and I don't really care what the physical form is."

Chrishell Stause took to Instagram last night with a short video explaining her relationship with the Australian musician G Flip.

The Selling Sunset star revealed that she was dating G during the season five reunion show, and while she was met with some support, she did acknowledge that some fans were "confused" by the relationship. 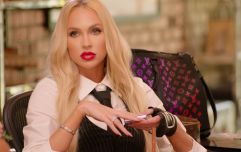 END_OF_DOCUMENT_TOKEN_TO_BE_REPLACED

In the three minute long video, Chrishell explained that there was some "context missing" from the reunion show.

"In this situation, it might be nice to give some context," she explained.

She then acknowledged that with G, they are in a different stage in their life, but added that this doesn't "diminish the deep connection" that they have made.

She then went on: "I know some of you won't understand this, or agree with this, but for me, it is about the person. It is about their heart. And yes, there's that part of you that's what you're attracted to. But for me, I am attracted to masculine energies, and I don't really care what the physical form is.

"With G, they identify as non-binary. So their pronouns are they/them. Everyone is different, but for them, they really feel like they are a mix and they identify on both sides of male/female.

"That's one of those things I personally find such a beautiful mix. And it's probably why we did connect on such a deep level so quickly." 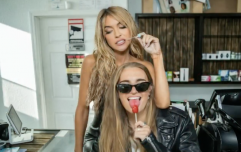 END_OF_DOCUMENT_TOKEN_TO_BE_REPLACED

Chrishell then encouraged her fans to keep their curiosity evolving.

"I hope you guys see that I'm the same person you've been following this whole time," she said.

She then finished up by saying that she's enjoying life and is really happy.

"You don't have to be worried about me, guys," she said. "I hope, if this is all confusing for you, you stick around and keep an open mind. I think that's a beautiful thing."

popular
Traditional names such as Mary, Maureen, John and Michael may soon be extinct
Roz Purcell wants people to stop asking when she’s going to have kids
Young mum packs her bags and travels the world with 3-year-old son
When can we expect the outcome of the Johnny Depp vs Amber Heard case?
Doctors urge women not to follow Kourtney Kardashian's 'semen' fertility advice
The 2 Johnnies share unbelievable catfish ordeal as woman 'targets 40 people'
Husband of school teacher killed in Texas shooting dies of heart attack
You may also like
2 weeks ago
Selling Sunset's Christine Quinn says she quit Oppenheim group before the reunion show
2 weeks ago
Selling Sunset's Chrishell reacts to Maya's reaction to her new relationship with G Flip
3 weeks ago
Jason Oppenheim in tears over Chrishell split on Selling Sunset reunion
3 weeks ago
Chrishell Stause confirms new relationship with rapper G Flip
3 weeks ago
Selling Sunset's Maya opens up on watching season 5 following stillbirth
3 weeks ago
10 of the most ridiculous moments from Selling Sunset
Next Page