The Crown star confirmed for one of our favourite movie characters

The Crown's Claire Foy is officially set to star as Lisabeth Salander.

The Emmy nominated actress will now pick up where Noomi Rapace and Rooney Mara left off in The Girl With the Dragon Tattoo's sequel, The Girl in the Spider's Web.

The new instalment of the Sony franchise will begin production in January in Berlin and Stockholm, with the film due to be release on October 19, 2018. 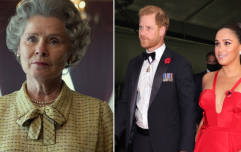 END_OF_DOCUMENT_TOKEN_TO_BE_REPLACED

The Evil Dead's director Fede Alvarez is set to direct the film, which is both a sequel and seemingly a reboot to the franchise.

According to The Hollywood Reporter, the director said he "couldn't be more thrilled" to have the actress on board the film following the announcement this morning.

"I couldn’t be more thrilled about Claire taking the reins of the iconic Lisbeth Salander.

"Claire is an incredible, rare talent who will inject a new and exciting life into Lisbeth.

"I can’t wait to bring this new story to a worldwide audience, with Claire Foy at its centre."

END_OF_DOCUMENT_TOKEN_TO_BE_REPLACED

The screenplay for the film is being written based on the novel by David Lagercrantz by Steven Knight, Fede Alvarez and Jay Basu.

The Girl in the Spider's Web is also the first film inspired by the best-selling series to be made into an English-language film in its initial adaptation.

Previous instalments from the Millennium series began as Swedish-language films before being translated.

popular
Love Island's Zara's brother reveals the real beef going on between her and Olivia
Little boy dies of cancer after doctors ignored mother's warnings six times
Funeral of Cork toddler takes place after choking accident
Anne Hathaway shares disappointing news about The Princess Diaries 3
Lauren Goodger shares that she's "healthy again" amid her grief
Abigail Breslin marries longtime love Ira Kunyansky
Love Island first look: Tom and Ellie's secret kiss is revealed as they head back for round two
You may also like
2 months ago
Princess Diana fashion searches surge ahead of The Crown season 5
3 months ago
Watch: The trailer for season 5 of The Crown is finally here
3 months ago
The Crown attracts backlash over plans to depict Diana's death
3 months ago
The Crown launch casting appeal for Prince Harry
4 months ago
The Crown producers have a plan in place for if the Queen dies during filming
4 months ago
The Crown has found their William and Kate for the upcoming seasons 5 and 6
Next Page