There was also a major announcement made about her Lemonade album.

Not only did she drop her Homecoming documentary on Netflix on Friday (currently sitting pretty with a stellar 92% on Metacritic), but on the same day, she surprise-released a 40-track live-album from the Coachella performance, which also included two new bonus tracks.

END_OF_DOCUMENT_TOKEN_TO_BE_REPLACED

Well, it looks like the good times are still coming for the Bey-Hive.

On Monday April 23, the Lemonade album - which has been a Tidal exclusive since it was released in April 2016 - will be reportedly made available on all platforms.

Yep, if you've got Spotify, you'll soon be able to enjoy 'Formation' and 'Sorry' whenever you please! 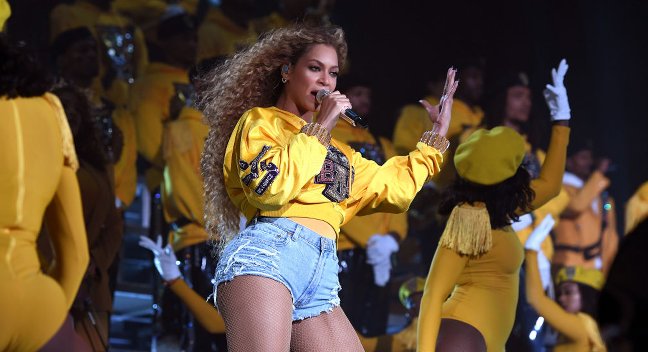 END_OF_DOCUMENT_TOKEN_TO_BE_REPLACED

On top of that, Variety have reported that Homecoming is just the first of three projects lined up between Beyoncé and Netflix.

The artist has reportedly been paid $60 million for the three-project deal, and while no details have yet been announced on what the other two projects might be, rumours have begun to circulate that one of them will be a new visual album.

Previously, Beyoncé aired her Lemonade visual album on HBO to coincide with the release of the album itself, and there was a three-year gap between her self-titled 2013 album and the release of the Lemonade album, so the numbers support the rumours.

Hopefully we won't have too much longer to wait to find out, but knowing Beyoncé, we won't know a thing until is already made, finished, and released into the world.

popular
Traditional names such as Mary, Maureen, John and Michael may soon be extinct
Doctors urge women not to follow Kourtney Kardashian's 'semen' fertility advice
Husband of school teacher killed in Texas shooting dies of heart attack
Two My Chemical Romance fans get engaged at Dublin gig in viral TikTok
Bridgerton's Ruby Barker hospitalised amid "mental health struggle"
The 2 Johnnies share unbelievable catfish ordeal as woman 'targets 40 people'
Teenager in critical condition after being airlifted to hospital following crash
You may also like
3 days ago
TikTok might be ruining the music industry - here's how
1 week ago
Sorry but we need a Mika arena tour immediately
1 week ago
The six Eurovision countries with "irregular voting patterns" have been revealed
1 week ago
Eurovision producers reveal "irregular voting patterns" during Saturday night's final
2 weeks ago
My Chemical Romance are back and it's time for an emo revival
2 weeks ago
Nick Cave pays tribute to son Jethro, who has passed away aged 31
Next Page