Irish Band Save The Day in Motorway Crash

Irish band The Script have been hailed as superheroes after rescuing a woman involved in a motorway crash earlier today.

The band were travelling to a gig in Manchester Arena when they noticed the crash at the side of the road and stopped to help.

According to The Mirror, the crash took place on the Oxfordshire stretch of the motorway which runs from London to Birmingham.

The band took to Twitter after the incident writing: 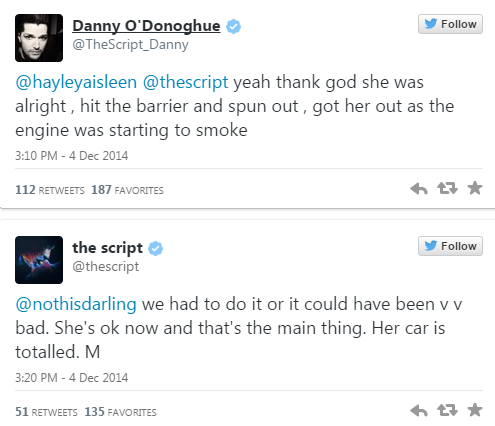 END_OF_DOCUMENT_TOKEN_TO_BE_REPLACED

The woman involved in the crash spoke to radio station Key 103 after the crash: "I was hit by the side and it kept spinning round and round. Then they got me out of the car. There was all sorts going on at the same time."

Quick to acknowledge the band's help, the 25-year-old continued: "I gave them a cuddle before I left but I never said thank you."