A rare breach of royal protocol by Kate Middleton.

As you may be aware, going against royal rules is frowned upon by the Queen and with that in mind, it's a very rare occurrence.

However, it seems that Queen Elizabeth II decided to let things slide on one occasion and gave Kate Middleton permission to break long-standing protocol.

According to reports, the Duchess was previously allowed to take pictures at the Queen's country residence in Balmoral, which isn't the done thing. 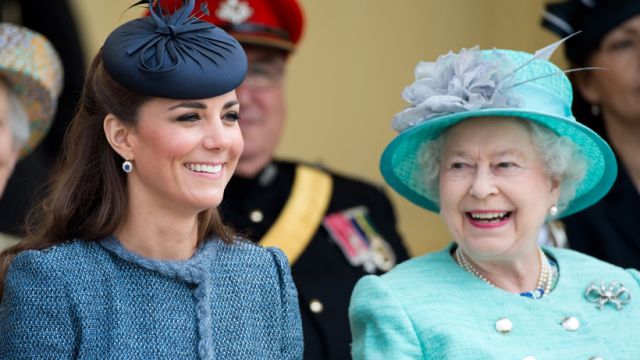 As fans of the Duchess of Cambridge will know, she loves photography and is responsible for some of the gorgeous snaps of her children featured on the Kensington Palace account.

Kate is a patron of the Royal Photographic Society and taking photos has been a hobby of hers for some time which explains why the Queen's decision was viewed as such a big step.

Katie Nicholl wrote about this huge moment in the relationship between the pair in her book Kate: The Future Queen.

"Until now the Queen had met Kate only fleetingly at the wedding of Peter and Autumn Phillips, but she went out of her way to make her feel welcome, giving her permission to take pictures at Balmoral".

She went on to explain why it was such a big deal, describing it as a "generous move" on the part of the Queen.

"As a woman who has lived her entire life in the public eye, the Queen rarely lets her guard down, and very few apart from her family and closest friends get to see the real Elizabeth".

'William didn’t feel he could do much to help': Kate Middleton opens up about her experience with severe morning sickness

END_OF_DOCUMENT_TOKEN_TO_BE_REPLACED

Balmoral in the Scottish Highlands is a very special place for the Queen and according to reports, she started her summer holiday a few days ago.

Every year, she spends some time in the royal residence and she's not expected back at Buckingham Palace until early October.

Several members of the royal family are thought to have received invites to Balmoral this summer including the Duke and Duchess of Sussex and their baby son Archie.

The Queen is officially on hols!She was at Buckingham Palace yest for a meeting of the Privy Council, to swear in the new political members. Today she’ll travel to Balmoral for her annual summer holidays (delayed due to the new British PM) & will return to London in early October pic.twitter.com/Hl61iwThqs


popular
BRB, running to Penneys for the €19 trousers that look like they cost ten times the price
Say hello to the €40 Stradivarius dress you're going to be seeing everywhere in summer
Holly Willoughby's Zara shirt is the workwear must-have you need in your life
The dress that Holly Willoughby wore this morning is getting very mixed reactions
'Be a lady they said' made waves yesterday, at the exact moment it should have
The comfy €42 M&S boots we're going to be living in all spring
EastEnders have 'revealed' Bex Fowler's exit storyline
You may also like
1 week ago
Kensington Palace shares a previously unseen photo of Princess Charlotte and it's just adorable
1 week ago
Say hello to the €45 face oil that Kate Middleton absolutely SWEARS by
1 week ago
Kate Middleton is set to make her podcast debut on Giovanna Fletcher's Happy Mum Happy Baby
2 weeks ago
Kate Middleton and Prince William have announced an official visit to Ireland next month
2 weeks ago
Kate Middleton is back wearing Zara again but of course, her dress is now sold out
3 weeks ago
Kate Middleton has shared a powerful message in honour of Children's Mental Health Week
Next Page