Laura Whitmore has landed her own radio show, and it sounds seriously cool

This is going to be deadly!

Laura Whitmore has landed herself her own radio show.

From presenting on top channels and shows over the years, including MTV, I'm A Celebrity, Get Me Out of Here NOW! and Survival of the Fittest, she is moving her talents to radio.

And now for her new gig, Laura will present The Sunday Session on BBC Radio 5 Live.

It has been described as: “Laura and big-name guests settle in, kick back and chew over everything that’s caught their imaginations over the week.” 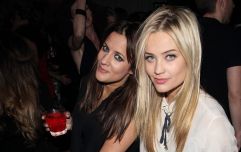 END_OF_DOCUMENT_TOKEN_TO_BE_REPLACED

Hmm, interesting. We're looking forward to seeing what it involves!

Her first show will air on July 22 at 11am and we will definitely be listening.

Meanwhile, her relationship with Love Island's Ian Stirling has been going from strength to strength.

“They haven’t been together too long but she wanted to buy a house. It’s their relationship getting more serious.

“Because of their  busy jobs they don’t get to spend a lot of time together but this will mean  they will see a lot more of each other.

“They are very steady as a couple and it is the natural next step.”

popular
Bride asks for divorce day after wedding following groom's disrespectful cake stunt
Tributes paid following tragic death of Emma Pattison and her family
Head of dive squad searching for Nicola Bulley thinks 'something's not right'
Has the Call Her Daddy podcast just pulled the best marketing stunt of all time?
Stacey Solomon hints at baby girl's name as due date nears
Love Island fans are calling for Ron to be dumped after accusing him of "gaslighting" Lana
Teenager killed in shark attack after swimming with dolphins in Australia
You may also like
2 months ago
Love Island 2023 return finally unveiled - and it's just weeks away
3 months ago
Ekin-Su explains why she turned down Love Island presenting job
3 months ago
Maya Jama is officially the new host of Love Island
5 months ago
Former Love Island stars to feature in tell all docuseries about the show
5 months ago
Laura Whitmore reveals she wasn't allowed to ask Love Island contestants if they were okay
5 months ago
Could Zara McDermott and Sam Thompson be the next Love Island hosts?
Next Page