That is one hot mama!

The pair became engaged last June after a romantic garden proposal. This is their first child. 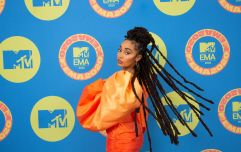 Little Mix's Leigh-Anne Pinnock was "scared" to call out racism

END_OF_DOCUMENT_TOKEN_TO_BE_REPLACED

Taking to Instagram to tell the world her happy news, Leigh-Anne said: "We've dreamed about this moment for so long and we can't believe the dream is finally coming true... we can't wait to meet you."

Gray proposed to Pinnock last year on their fourth anniversary. The pair announced their engagement last May.

Leigh-Anne shot to fame on X Factor when she joined Little Mix alongside fellow band members Perrie Edwards and Jade Thirlwall. Jesy Nelson announced she was leaving the band some months ago to focus on her mental health.

Girls With Goals || Her · Ep.161: Feeling Peachy - Sharon Keegan of Peachylean on being an absolute BOSS!
popular
The fashion world is OBSESSED with potato brown right now – and for good reason
More footage of Tristan Thompson cheating on Khloe has emerged
Kate Middleton has addressed the rumours that she's pregnant with her fourth child
Woman buys 148 year old house, goes viral after finding secret passage way
QUIZ: Can you beat Ross's quiz in Friends?
Someone has ranked the penis size of men from all over the world
Big Brother star left temporarily blinded and scarred after TikTok DIY beauty 'hack'
You may also like
3 years ago
Little Mix fans think Leigh-Anne is getting married thanks to this snap
1 week ago
Amy Adams and Patrick Dempsey land in Ireland for Enchanted sequel
1 week ago
Tristan Thompson threatens legal action over new cheating claims
1 week ago
Meghan Markle is releasing a children's book inspired by Harry and Archie
1 week ago
Paris Hilton never wore a 'Stop Being Poor' top
1 week ago
Love Island's Maura Higgins and Chris Taylor confirm split
Next Page