"Even the bits that society says shouldn’t be there..."

Stacey Solomon is over on Instagram being a body positivity queen again, and other statements that are hardly surprising considering how much of a legend she is.

The Loose Women presenter, signer, and all round classy gal recent gave birth to her third son, Rex. 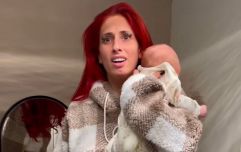 Stacey Solomon mortified after walking around shop in see through leggings

END_OF_DOCUMENT_TOKEN_TO_BE_REPLACED

Since then, she has taken upon herself to provide an accurate, unfiltered, and totally honest depiction of motherhood - baby sick and all.

This has included a lot of brutally candid posts about her feeling sad that she was no longer pregnant, photos of her body as it recovers, and chat of being up all night.

This weekend, Stacey shared a photo of herself in a bikini cradling baby Rex against her chest.

She wrote that despite the apparent "flaws" that her body might have, she loves every part of it - because it allowed her to create her three children. 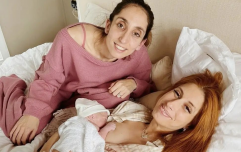 END_OF_DOCUMENT_TOKEN_TO_BE_REPLACED

A decent way to look at it, in fairness.

"Even the bits that society says shouldn’t be there. Because EVERY bit of it came together to make him. And Zachary. And Leighton.

"Cellulite is beautiful, back bumps add character and tummy ledges are great for resting a baby on." 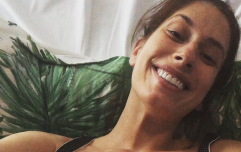 END_OF_DOCUMENT_TOKEN_TO_BE_REPLACED

Stacey also told her fans all about her first full day back at work since giving birth to Rex.

She said that she wanted to pay tribute to all of the mothers who leave their babies and go back to work - sometimes to jobs that they hate, just to make ends meet.

"I felt really emotional today but the reality for me was that I was able to bring Rex with me, to a job that I absolutely love, doing something I really enjoy," she said.

"I sat for a long time today just thinking about how lucky I am. And I couldn’t help but spend a lot of time thinking about women with really tough jobs, ones they may not even like doing. Jobs that aren’t understanding. The jobs that don’t allow you the chance to continue to work and also allow you to include your child in some way."

She then told of all of the times that she had to work jobs that she didn't like in order to bring her other sons up, particularly Zachary, who she had before finishing college.

"I know that that scenario and so many others are lots of people’s current reality so basically I’m in awe of you all," she said.

She and Joe Swash have been together since 2016.