Lucy Mecklenburgh and Ryan Thomas have welcomed a baby boy

Lucy Mecklenburgh and Ryan Thomas have welcomed a baby boy.

The 28-year-old confirmed their happy news with an adorable photo of the newborn, which showed his hand curled around her finger.

In the caption, she also shared the name that they had picked for their baby boy: Roman Ravello Thomas.

The couple had a massive year last year, after announcing their engagement in June and Lucy's pregnancy in late August.

In September, they shared a video of the moment they found out they were expecting a boy. 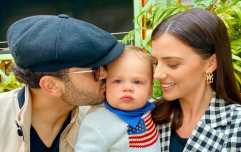 END_OF_DOCUMENT_TOKEN_TO_BE_REPLACED

The footage shows the couple sitting in a cafe, with the printed-out version of the gender confirmation in Lucy's hand.

"Shall I read it to you?" the 28-year-old asks him, before starting to scan through the papers.

Ryan is seen rubbing his hands together excitedly, before Lucy confirms they are expecting a baby boy - which causes him to burst into laughter.

"It's a boy," he shouts excitedly, before continuing the celebrations.

Lucy and Ryan announced they were expecting their first child together in late August - on the former TOWIE star's 28th birthday, to be exact.

The photo shows the pair sitting in front of a bunch of silver and gold balloons, as they hold up a baby grow.

"Best birthday present I’ve ever had. Love you," Lucy captioned the photo.

popular
Two Love Island 2022 stars have just become step siblings...
Molly Mae Hague shares emotional moment she discovered she was pregnant
Abducted in Plain Sight: True crime drama follows girl who was kidnapped twice by the same man
Joe Swash has reportedly flown to South Africa to film I'm A Celeb All Stars
Female child rushed to hospital after violent incident in Co. Clare
Young girl found injured in Co. Clare house is in critical condition
Here's when Florence Pugh's new Irish film lands on Netflix
You may also like
3 years ago
Ryan Thomas and Lucy Mecklenburgh announce they're expecting a baby
3 years ago
Ryan Thomas and Lucy Mecklenburgh have gotten engaged and just LOOK at the ring
3 years ago
Roxanne Pallett says PTSD led her to misinterpret Ryan Thomas 'punch' incident in CBB
3 years ago
Lucy Mecklenburgh 'banned from shopping' at ASOS after making complaint
4 years ago
Ryan Thomas has received his 'letter of apology' from Roxanne Pallett
4 years ago
It seems like Roxanne Pallett has lied again since leaving the CBB house
Next Page