This is sure to be emotional.

Prince William and Prince Harry are set to unveil a statue of their late mother, Princess Diana.

To mark the 20th anniversary of her death, her sons commissioned the statue as a tribute to her and said it's time to "recognise her positive impact" at home and abroad.

The memorial will be erected in the gardens of her former home in Kensington Palace, however The Irish Mirror reports that it will not be completed until later this year.

The statue will follow another memorial of Diana, The White Garden, which also lies in the palace and was completed during the spring.

Diana died in a car crash in Paris on August 31, aged just 36, and throughout the summer months, William and Harry have made sure to pay tribute to their mother. 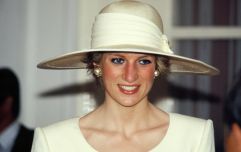 END_OF_DOCUMENT_TOKEN_TO_BE_REPLACED

Speaking about the statue in January, the princes said: "It has been 20 years since our mother's death and the time is right to recognise her positive impact in the UK and around the world with a permanent statue.

"Our mother touched so many lives. We hope the statue will help all those who visit Kensington Palace to reflect on her life and her legacy."

Last month, the princes took part in a documentary about her life which saw them look at old photos and reminisce about their childhood.

We're looking forward to the unveiling of the new statue.

popular
PERSONALITY QUIZ: Which Normal People character are you?
From Miami to Mallow: The Irish Instagram star who's renovating an old post office during lockdown
The Skin Nerd on updating your lockdown skincare routine, and picking spots - if you HAVE to
5 ways you can help the George Floyd protesters and Black Lives Matter movement
After days of silence, Scott and Sofia finally comment on the break up rumours
So, William and Harry have a step sister... and who knew?
PIC: People are gushing over this fake image of Ireland
You may also like
6 months ago
Ouch! Prince William had a pretty harsh answer when asked if he watches The Crown
6 months ago
Kate Middleton is following in Princess Diana's footsteps when it comes to raising royal children
9 months ago
Princess Diana had the sweetest nickname for Prince Harry, and we're in floods
9 months ago
You can now take a college course on the style and fashion of the royal family
10 months ago
Princess Diana’s childhood nickname was really cute (and very fitting)
10 months ago
Harry and Meghan made sure a tribute to Diana was included in Archie's christening photos
Next Page