Rob Kardashian leaked Kylie's phone number, so we text her

Rob Kardashian is a divil.

He tweeted Kylie Jenner's phone number last night and seemed pretty thrilled with himself about it.

Naturally, I've poked my oar in and decided to text Kylie because a) It's probably not her actual number b) There's not a hope in heck she's going to reply and c) I have literally nothing better to do with my time.

Here's some texts I sent to my good friend Kylie Jenner.

I played it very cool with my first text. I kind of wanted to trick her into thinking that I was one of her friends, which by the end of this exercise, I will be. 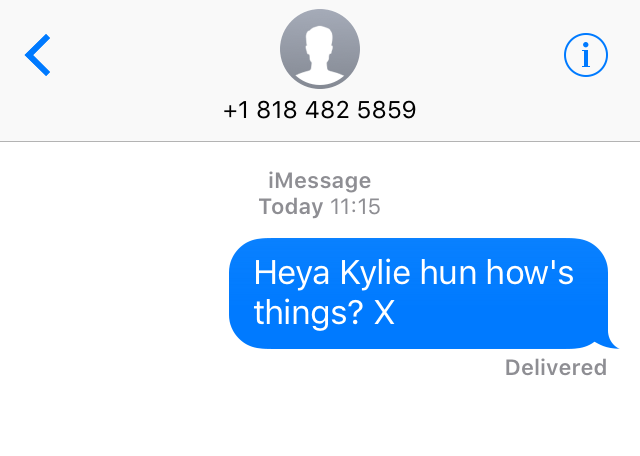 Rudely, there was no reply. I then tried to get her attention with some light humour and a very subtle hint at what I'm hoping to gain from this interaction. 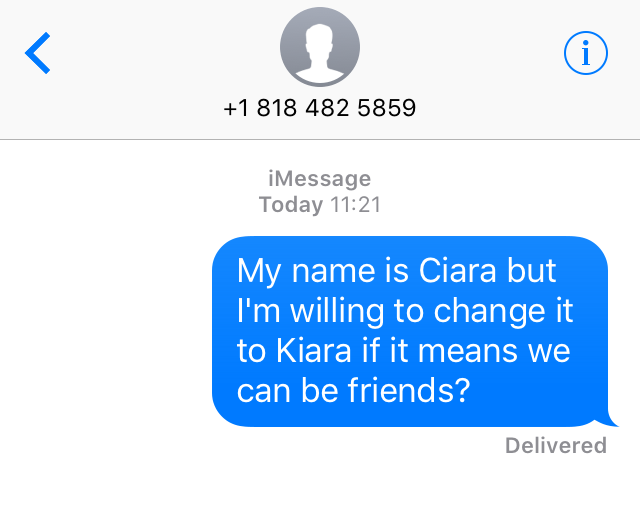 Again, no reply. The pressure was on. It was time to bring out the big hitters.I needed a solid joke that would make her BEG for my friendship. 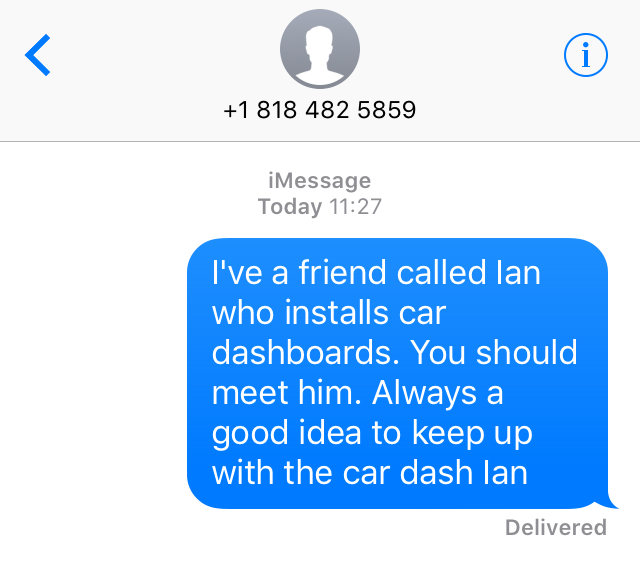 It would appear that the pressure got to me because that was complete garbage and, rightfully so, Kylie ignored it. So I tried again. 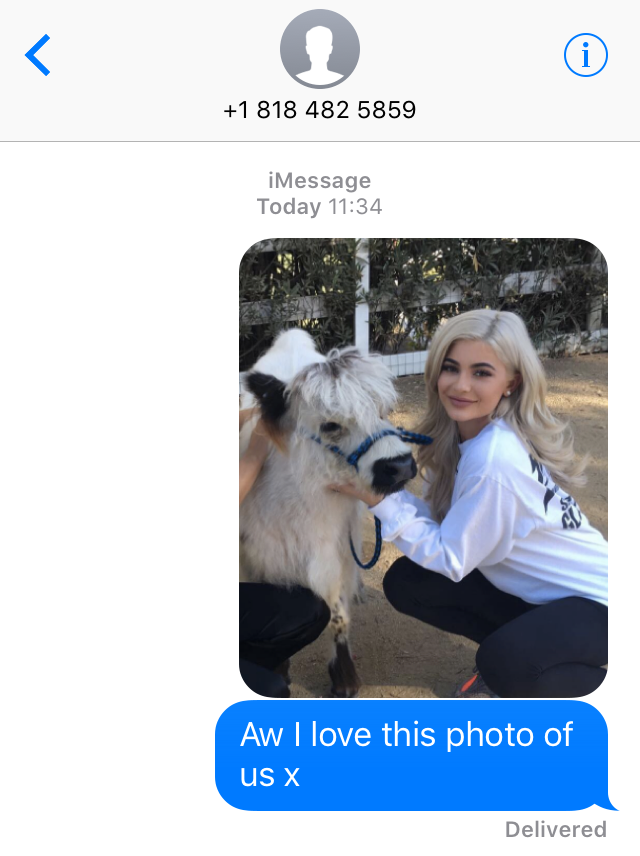 I really thought that would do it. It's funny, self-deprecating and I felt she'd appreciate it because she looks great in the photo. Alas, she was having none of my shit. I decided to try to evoke a non-existent memory. 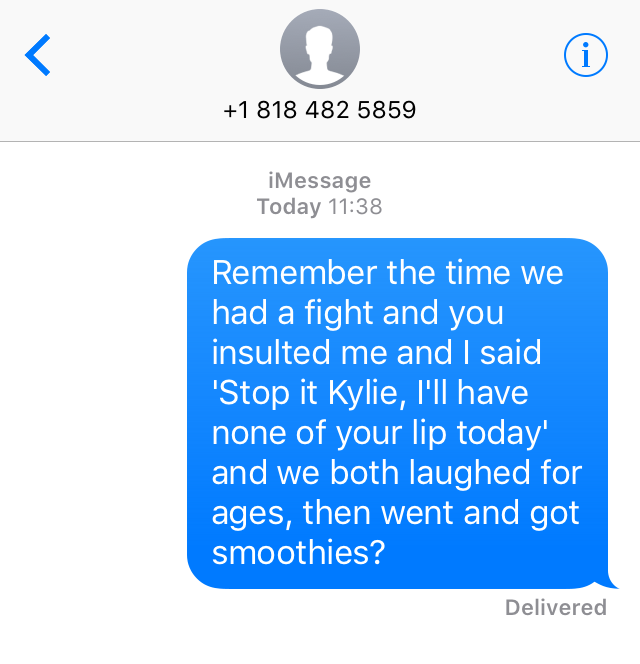 As expected, Kylie still wasn't playing ball. The weight that I was failing myself and my country was starting to hit home. I needed a killer joke and I needed one fast. I put all my efforts into this next one. 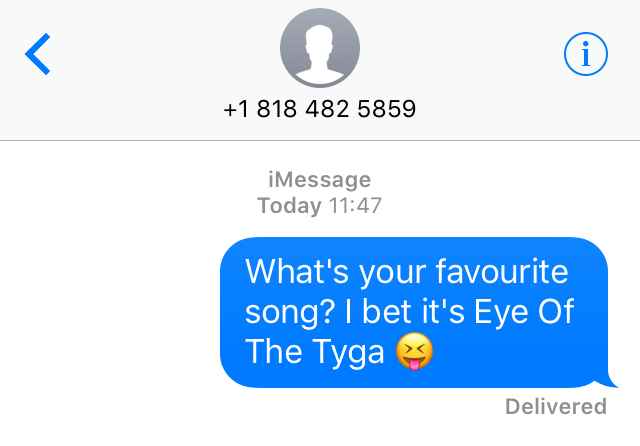 I will take that joke to the grave, that's how strongly I feel about it. Maybe it's not really Kylie's phone number at all that Rob leaked. No way would she ignore such A+ material. Rob has tricked me, he's tricked us all.

BUT WAIT - A few minutes later, this happened: 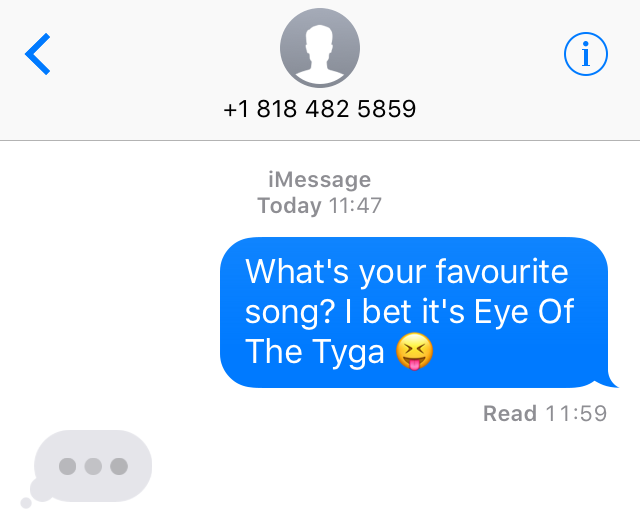 She's typing! This is it, Kylie Jenner is about to swoon over my excellent sense of humour and offer to fly me out to L.A. to be her new best friend. I will get so many lip kits, I'll be the envy of every soul back in Ireland.

Then, to my dismay, the screen simply went back to this: 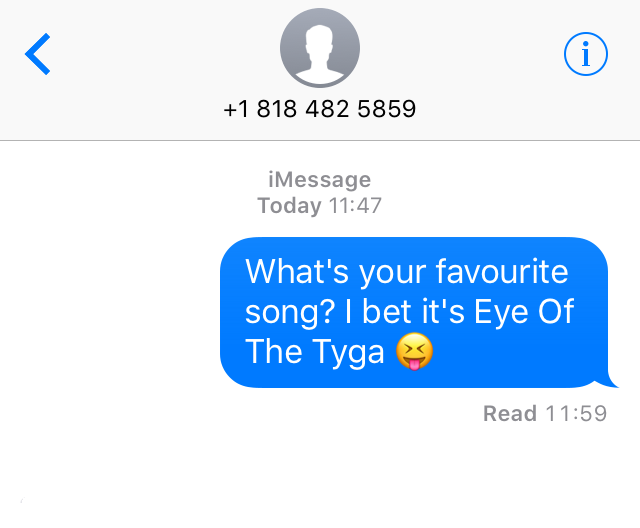 After consulting my colleagues, there's a few possible things that have happened here:

I am choosing to believe points 1,2,3 and disregarding 4 because that is blatantly not what's happened. Point number 5 was rude.

Henceforth, today, 27th September 2016, is the day that I made Kylie Jenner laugh and I cemented myself as one of her closest friends.

popular
Vogue Williams slams man who refused to swap seats with her on plane
Mum charged with murder after allegedly leaving baby in hot car
This is the exact date the weather will get warm again
New Zealand family find two bodies in second hand suitcases
Why Are Men so Obsessed With Boobs? The Answer is Pretty Surprising...
Gwen Stefani reportedly pregnant with baby number four
The Greatest Showman is becoming a Broadway musical and we need a second
You may also like
3 months ago
Hilarious moment Irish Rail passenger spots "collapsed man" on platform
8 months ago
TikToker fakes a wedding photoshoot to get back at ex
10 months ago
Bride receives bouquet of chicken nuggets from best friend on wedding day
10 months ago
These newlyweds wore tracksuits to their reception
1 year ago
Tom Daley went viral for knitting at the Olympics - and it's all for charity
1 year ago
Shrek fan notices X-rated Easter egg that we all missed as kids
Next Page