How the tables have turned.

In the season five reunion special, Jason Oppenheim told host Tan France that Christine no longer “has a place” at his luxury real estate business.

END_OF_DOCUMENT_TOKEN_TO_BE_REPLACED

Commenting on what was said, Christine shared in a post on TikTok, writing: "Of course there’s no place for me. I terminated my contract weeks ago prior to filming. I have my own company now lol.”

Christine left the group when her Selling Sunset co-star Emma Hernan accused her of bribing one of her clients to work with her instead of Emma.

Jason revealed during the Netflix reunion party that he had spoken to Emma's client about the allegations of bribery and would "love to hear" Christine's side of the story. 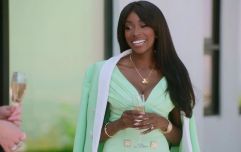 END_OF_DOCUMENT_TOKEN_TO_BE_REPLACED

He said: “I do believe there are sides to stories but at the time same time I don’t think it’s for debate that she did this. We’ve texted and we haven’t really addressed this situation. She hasn’t reached out to talk about it.

“Right now there’s not a place for her at The Oppenheim Group. In the future, if she can take real estate seriously, if I can get an understanding of her perspective on things, if she changes her behaviour, if she brings in a big listing…

“There are a lot of reasons where I would consider her having a place at the Oppenheim Group but I have to say right now there is no place.”

Christine has now started up her own business with her husband Christian Richard called RealOpen.

popular
Wagatha Christie: Rebekah Vardy storms out of court just 30 minutes into final day
Claire Byrne Live viewers in shock as woman shares family DNA secret
Helen McCrory's children give heartbreaking tributes at her memorial service
Only a matter of time before monkeypox spreads to Ireland, says expert
Ashley Graham says she nearly died while giving birth to her twin boys
Everything we know about Love Island 2022 so far
Dog owners warned about the "big stretch"
You may also like
22 hours ago
Netflix's Heartstopper has been renewed for 2 more seasons
2 days ago
WATCH: We finally have a trailer for Jennifer Lopez's Netflix documentary
6 days ago
Neil Patrick Harris to star in new Netflix rom-com about a gay single man in Manhatten
1 week ago
Virgin River season 4 is coming – and here's what we know so far
1 week ago
Bridgerton has announced a newbie coming to season three
1 week ago
Ads could be coming to Netflix before the end of this year
Next Page