Stacey Dooley's ex-boyfriend Sam Tucknott has blamed her Strictly partner Kevin Clifton for their break-up in an explosive new interview.

Stacey and Kevin won the dance show in December.

She and other half Sam went their separate ways last month after she grew distant during the competition, Sam has said.

He claimed he found a text on Stacey's phone from Kevin after they broke up that said 'I love you'.

"The blame is with Kevin. He’s an absolute rat," Sam told The Sun. 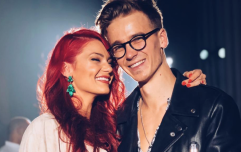 END_OF_DOCUMENT_TOKEN_TO_BE_REPLACED

He confronted Stacey, who told him that she only started things with Kevin after their split.

Sam said he pushed her to do the show and that he and Kevin initially got on well.

“She wanted a new challenge, and I was excited to see how it would unfold. I thought nothing would change that girl.”

The first red flag, he said, was when he saw a text on Stacey's phone from Kevin in December.

"It said, ‘You did really well. I love dancing with you and spending every minute with you’.

"As a guy, as a boyfriend, I noted it but I didn’t want to bring it up with her."

Stacey and Sam split up at the end of March.

A source said that her heavy work schedule was to blame.

“She barely saw him during the month-long tour and has gone straight back into filming documentaries and has been travelling all over the world.

“Their lives have just gone in different directions."