Zayn dyed his hair and beard blonde... and showed off his huge head tattoo yesterday

Not that we're complaining, the man can basically pull off anything.

Zayn, who just broke up with his ex-girlfriend Gigi Hadid, debuted the new look on the set of his new music video in Miami yesterday.

He went all out with the look, dying both his hair and beard peroxide blonde, which showed off his new tattoo on the back of his head.

The tattoo is of a rose, with a stem going down the middle of his head. His red and black '25' tattoo was also more prominent on the side of his neck.

He wore a brown double breasted suit for the recording of the video, with a black and white patterned shirt underneath.

The new look comes just a week after Zayn and his former girlfriend Gigi Hadid announced their breakup. 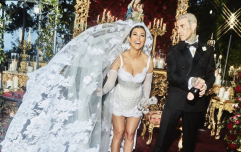 END_OF_DOCUMENT_TOKEN_TO_BE_REPLACED

In seperate social media posts, they thanked their fans for being so supportive throughout the relationship, and said they will always respect each other.

“Gigi and I had an incredibly meaningful, loving and fun relationship and I have a huge amount of respect and adoration for Gigi as a woman and friend.

“She has such an incredible soul. I’m grateful to all of our fans for respecting this difficult decision and our privacy at this time; we wish this news could have come from us first. We love you all. xZ”

"Breakup statements often seem impersonal because there is really no way to put into words what two people experience together over a few years..not only in the relationship, but in life in general.

"I'm forever grateful for the love, time and life lessons that Z and I shared. I want nothing but the best for him and will continue to support him as a friend that I have immense respect and love for.

"As for the future, whatever's meant to be will always be."