The trailer for the highly anticipated Gossip Girl reboot is finally here and it looks electric.

That's right, we've finally been given a proper glimpse of what to expect from the remake of the iconic 2000's TV show. It's been given a Gen Z makeover but we're hopeful that it will retain that distinct Gossip Girl flare.

HBO Max dropped the trailer earlier this week, and while it doesn't give much away, here are 5 things we can take away from the sneak peak.

Just in case you were worried, the iconic Gossip Girl steps haven't gone anywhere. While we're dealing with a whole new cast of characters, it looks like it'll be business as usual, with the steps hosting its fair share of meetings, confrontations, and, naturally, drama.

Move over Blair Waldorf because Julien Calloway is coming for your crown. One thing the trailer makes plain is that the show's resident mean girl will be played by up-and-coming actress Jordan Alexander. Will she be able to rival Blair's extraordinary level of sass? Only time will tell.

The trailer teases a number of same-sex pairings among the cast, and we're hopeful the series itself won't shy away from celebrating LGBT+ narratives. 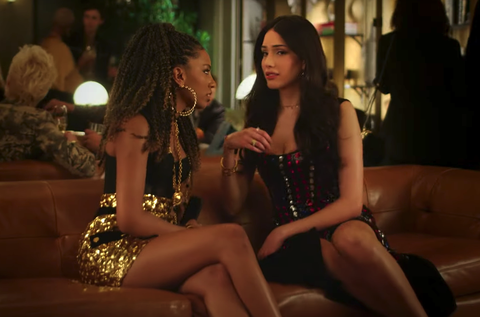 While we loved the socks off the original Gossip Girl, the dated technology serves as a distraction when we go for a re-watch. Thankfully, HBO appears to have moved with the times - less blog posts, more Instagram pictures. What's more, the series' lead, Julien, is an influencer, so we can expect a generous dollop of drama to come from her endeavors.

Importantly, the trailer shared that the Gossip Girl reboot will be hitting HBO Max on July 8. Rest assured that we'll be keeping our ears out for ways Irish viewers can tune in.