A gay man has suffered a homophobic attack since he first appeared on Channel 4 show First Dates, revealing he has been trolled online since the show aired.

Viewers may remember Daniel May as a restaurant-goer two weeks ago on the popular dating show, where he was paired with Italian high-heel enthusiast Paolo.

While the pair seemed to initially hit it off, Daniel decided to let Paolo down when he heard he chose to wear high heels regularly, telling his date:

END_OF_DOCUMENT_TOKEN_TO_BE_REPLACED

“I honestly don't think I could walk down the street with someone that wears high heels."

He later revealed in the post-date analysis:

"As human beings, we're all entitled to express ourselves in any way we want possible.

"But I do think certain camp people make it a lot harder for gay men to be accepted in the world."

In shocking news, Daniel revealed to Attitude magazine he was outside his London home earlier this week when he was approached by two men in their late 20s.

May revealed that he was called by the men who drew in closer to him before asking him, “you’re that faggot that’s on TV, aren’t you?”

May tells Attitude he responded by answering:

“Well I am a faggot and I was on TV yes, at which point he punched me.”

A lot of you will be happy to hear that I was attacked on the way home.... "Oi... Your that faggot off the tv" pic.twitter.com/dtzINlJvLF

While the attack was a physical assault, May added that he has been trolled online since appearing on the show.

Fearful that his comments were misconstrued, he added: 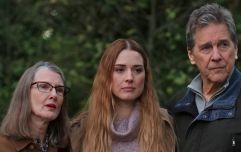 END_OF_DOCUMENT_TOKEN_TO_BE_REPLACED

"I'm allowed to have a preference, and my preference when I date a guy is that I'm not initially attracted to a man who would wear heels, which is why the date on First Dates didn't work out.

"I have been getting death threats on Twitter, Facebook and people have been saying things to me like if they see me out they will pour their drink over me.”

Following his attack, Daniel isn’t sure if he was recognised from the episode, or if his attackers recognised him from the social media hate he has been forced to endure:

May says the attack also does not make him regret participating in the television program, he now feels “nervous about going out” following his appearance on the show.

popular
Another Strictly star has pulled out of the live show
Simon Harris gives three urgent options for easing restrictions next week
Tributes paid to Limerick based blogger and model Patrick McLoughney
This TikTok hack shows you how to pack more despite baggage allowance
Lidl closing early this weekend to thank staff for hard work
Not going anywhere: Baby names set to stay popular for the next decade
Squid Game fans spot massive clue in Tug of War game
You may also like
2 years ago
Tonight's episode of The Rotunda will have you in tears
2 years ago
Did you spot this massive Phoebe mistake in the first episode of Friends?
3 years ago
This is what First Dates' barman Merlin Griffiths does in real life
3 years ago
Love Island's Eyal linked to a contestant from last year's show
3 years ago
Nick left Home and Away 15 years ago and OMG, would you just look at him now
3 years ago
Love Island's Zara defends Adam's behaviour and honestly, is this real life?
Next Page