RuPaul's Drag Race is dropping into the UK for the very first time with an all-star British based cast of judges and drag queens.

The show will air on BBC Three and is set to follow the same outrageous themes which have made it so popular in America.

For those unaware, the show format is simple: It’s a reality TV show where a bunch of drag queens compete to show off their C.U.N.T.: charisma, uniqueness, nerve and talent.

Contestants then compete in a series of challenges and runway shows, where they are eliminated one-by-one until the last drag superstar is left standing.

The hugely popular US show has already reached its tenth season, becoming one of the highest rated shows in America.

Former guest judge spots have included the likes of Lady Gaga and Khloe Kardashian, so don't be surprised to see the glitz and glam of the UK show up at the races. 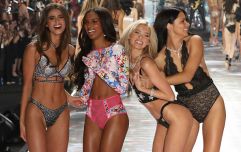 END_OF_DOCUMENT_TOKEN_TO_BE_REPLACED

And it looks like the organisers have royalty in their sights already, with a certain duchess being touted for one of the rolls.

Speaking to The Sun, RuPaul said: “I am beyond excited to celebrate the massive charisma, uniqueness, nerve and talent of the Queen’s queens. And before anyone asks, yes, we would be thrilled to have Meghan Markle join us, as we are already preparing a ‘Royal-Mother-To-Be’ runway challenge.”

There will be interpersonal dramas, exaggerated to the point of absurdity, impossibly elaborate homemade costumes, and emotional conversations about what it means to be queer in modern Britain.

RuPaul's Drag Race has run for ten seasons and counting since launching in 2009.

Girls With Goals || Her · Ep.161: Feeling Peachy - Sharon Keegan of Peachylean on being an absolute BOSS!
popular
Meghan was right to say Archie "won't be a prince" under Prince Charles
Love Island featuring show's first contestant with a disability
Opinion: It's your wedding, you can have an 'adults only' day if you want
Friends actor James Michael Tyler battling Stage 4 cancer
Laurel Hubbard to become first transgender Olympian
5 things we know for sure about this year's Love Island
Friends Star James Michael Tyler Files For Divorce
You may also like
1 day ago
Summer fashion: I got my entire staycation wardrobe sorted with these 7 buys
3 days ago
Tie back halter tops are this year's summer trend - here's five we love
4 days ago
Here's the story with the 'Coconut Girl' aesthetic all over TikTok this summer
1 week ago
This is why you need to add collars to your summer wardrobe
1 week ago
Balenciaga and Crocs team up to make stiletto sandals
2 weeks ago
Zara Home has a swimwear and beach collection that reeks of Mediterranean chic
Next Page