Beresford claimed the online abuse was "getting too much."

After Morgan's claim that he did not believe "a word" of what Meghan Markle said during her interview with Oprah Winfrey, Beresford defended the Duchess of Sussex's struggle with her mental health during her time as a senior member of the Royal family.

Following the live spat, Beresford took to social media to say that "claims of racism" should not have to be examined in order to make us feel more at ease.

I wish I had the privilege to sit on the fence. In order for me to do that I would have to strip myself of my identity and that’s not something I can do. It’s not any of our places to pick apart claims of racism in order to make us to feel more comfortable. ❤️

He said on Twitter: "I wish I had the privilege to sit on the fence. In order for me to do that I would have to strip myself of my identity and that’s not something I can do. It’s not any of our places to pick apart claims of racism in order to make us to feel more comfortable."

END_OF_DOCUMENT_TOKEN_TO_BE_REPLACED

In an article for the Telegraph, Beresford said that he was forced to quit social media after receiving an abundance of racist abuse on the online platforms.

He wrote: "Three weeks ago I took part in a television debate about the decision of the Duke and Duchess of Sussex to publicly reveal the racism they claimed to have suffered as members of the Royal Family."

"Since then I have been subjected to relentless racism myself on social media," he continued.

Beresford said that he has not publicly announced his departure from social media, however he said he was "forced to step away from Twitter and Facebook", because it was "getting too much." 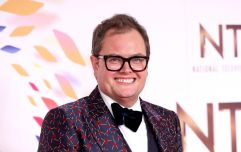 END_OF_DOCUMENT_TOKEN_TO_BE_REPLACED

"I am a strong person, but I am not made of steel," he wrote in his article for the Telegraph.

Beresford said that his experience of racist abuse is part of a much wider issue that exists in the UK.

Referring to a UK government-commissioned report on Race and Ethnic Disparities, Beresford said: "If we acknowledge there is racism in Britain – as the report does – then we have to acknowledge it will find its way into institutions.

"The report gives a false sense of hope that our work is done and will simultaneously give social media racists the comfort to push a little bit further as they hide in plain sight.

"The harsh reality, though, is that social media is just a reflection of a bigger problem in society," Beresford said.

His article comes after the government published a report on Race and Ethnic Disparities which found that, while racism exists in the UK, the country is not "institutionally racist."

popular
Bride asks for divorce day after wedding following groom's disrespectful cake stunt
The Greatest Showman is becoming a Broadway musical and we need a second
Gwen Stefani reportedly pregnant with baby number four
These are the most popular names for babies born in February
Natalie Imbruglia's Torn is actually a cover and the original just isn't the same
Police believe they know what happened to missing dog walker Nicola Bulley
Molly Mae fans are shocked after finding out how much Bambi's crib cost
You may also like
1 week ago
Lisa Loring, the original Wednesday Addams, dies aged 64
2 weeks ago
Pamela Anderson felt 'violated' by sex tape TV series
3 weeks ago
X Factor contestant Katie Waissel plans to sue Simon Cowell
1 month ago
Coronation Street and Love Actually actor Wyllie Longmore has died after cancer battle
1 month ago
Line of Duty reportedly returning for new three-episode series
1 month ago
ITV boss responds to calls for Jeremy Clarkson to step down from Who Wants To Be A Millionaire
Next Page