Amber and Greg go on a date tonight, and things seem to be heating up

So, the new Irish lad in the villa, Greg O'Shea, has just chosen Amber to join him on the Hideaway terrace for a date.

Amber arrives in the Hideaway and meets Greg for the first time.

END_OF_DOCUMENT_TOKEN_TO_BE_REPLACED

Speaking of his decision to choose Amber for a date, Greg CHARMINGLY says:

“I just thought you deserved a date after all the drama that’s been happening. You deserve to be spoilt a bit.”

Amber replies “It’s been hard. But I’ve come out the other end and I feel happier.”

Amber is keen to know what Greg is looking for in a girl. Greg says “I’m looking for confidence. You’re obviously very confident.” 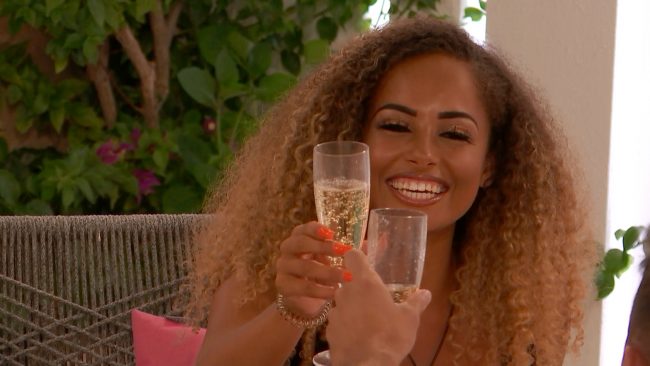 Greg replies “There is a first time for everything.”

END_OF_DOCUMENT_TOKEN_TO_BE_REPLACED

Amber and Greg continue to get to know each other. But Amber wants to know whether Greg only has eyes for her. Amber says “Is there anyone else you’re interested in, in the villa?”

Greg jokingly says “Anyone else? So, you’re saying I’m interested in you?”

Amber says “You’ve picked us for a date, so I’d like to think so!”

As the date draws to a close, Amber and Greg return to the villa. Amber fills some of her fellow Islanders in on her date with Greg. Amber says “His accent is fabulous. And he can take the banter.”

END_OF_DOCUMENT_TOKEN_TO_BE_REPLACED

Before the Islanders head to bed, Amber says to the girls “I’m telling you now, I haven’t liked one boy that has come in. That boy has got the luck of the Irish!”

But is Greg only interested in getting to know Amber? Or does he have his eye on another girl in the villa?

popular
Taoiseach Micheál Martin asks public for 3 things, confirms some restrictions staying
Man arrested after woman raped on train as passengers filmed it
Jamie Redknapp marries girlfriend without ever announcing engagement
Giovanni serenades Strictly partner Rose after Maura split
Family of four found dead in hotel sauna
Will the clubs be reopening on October 22? Here's what we know so far
Nightclubs will return with proof of vaccination under Government's new reopening plan
You may also like
21 hours ago
James Lock confirms relationship with Love Island's Megan Barton Hanson
5 days ago
Molly Mae Hague admits she's desperate for Tommy to propose
1 week ago
Jack Fincham says he attempted suicide after Love Island
2 weeks ago
Molly-Mae Hague needs a second surgery to treat her endometriosis
2 weeks ago
Love Island’s Jake reveals he no longer speaks to any of the girls from the villa
2 weeks ago
Love Island's Lucinda is officially back with Irish footballer Aaron Connolly
Next Page