A nice surprise for all the students currently studying for exams right now.

Fresh from their big win at the BAFTAs at the weekend, much-loved Saturday Night Takeaway hosts Ant and Dec were back at the coalface on Tuesday, taking a load of NUI Maynooth students by surprise while they were at it.

They weren’t just there for a casual visit either, a production team and cameras were also spotted during their trip to the Kildare town on Tuesday afternoon.

What exactly Ant and Dec were filming in Maynooth isn’t clear, but by all accounts, they were happy to chat and pose for photos for students who spotted them on campus. 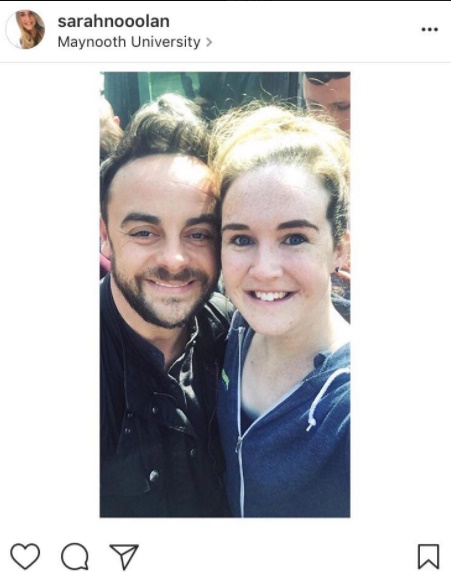 Really don't know what just happened but ya know got to meet Ant and Dec today no biggie ?

Just walked into Ant and Dec coming out of the toilets in Maynooth, haven't been this star struck since I met John Cena #YouCantSeeMe

Others, however, weren’t so lucky…

Actually cannot believe Ant and Dec are in Maynooth right now while I'm home studying for an exam in the morning pic.twitter.com/NHLPuCTRfm

I need photo evidence of Ant and Dec in Maynooth and until then you're all liars.

So Ant and Dec decided to show up at maynooth today on the one day I don't have exams, cheers lads👍

popular
Two schools in Scotland have been forced to close due to COVID-19 outbreaks
How to cope in this humidity: From sleeping better to dealing with frizzy hair!
This no bake 'Chocolate Refrigerator Cake' recipe has us drooling
Here's what happens on every day of your menstrual cycle (roughly)
It turns out we're all peeling oranges wrong and this madness has to stop
The €9 buy fans swear is an EXACT dupe of Estée Launder's popular Double Wear foundation
According to experts lunchboxes could be a big transmitter of Covid-19
You may also like
1 week ago
The second season of Dirty John lands on Netflix next week and we’re already hooked
1 week ago
QUIZ: How well do you know The Young Offenders?
2 weeks ago
Ellen DeGeneres addresses workplace allegations in letter to staff
2 weeks ago
WATCH: Brendan Gleeson nails the Donald Trump look and voice in first trailer for The Comey Rule
2 weeks ago
Erin's Diary: An official Derry Girls book is coming out this year
2 weeks ago
All the movies worth watching on TV this weekend
Next Page