Ant and Dec have confirmed they'll be hosting tonight's episode of Saturday Night Takeaway from their homes amid the coronavirus pandemic.

The presenters, who had no audience in the studio for last week's episode, took to Instagram on Friday to confirm the news.

The video shows Ant ringing Dec, to find out how his co-presenter is doing - and when he asked Ant what he was doing, he replied: "Not much, isolating, it's all the rage you know." 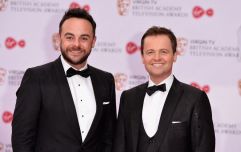 END_OF_DOCUMENT_TOKEN_TO_BE_REPLACED

Dec replied that while "everybody's at" self-isolating, it did "feel weird not being in studio getting takeaway ready for the weekend", before asking Ant what he would be doing on Saturday at 7pm.

"I'm going to do what the rest of the country are doing, ordering a takeaway and watching Takeaway," his pal replied. '

And after the pair settled on their takeaway choices for the evening, Ant had another suggestion in store.

"Tell you what if we're both going to be watching it why don't we watch it together with the rest of the country. Do the show on telly from both our houses," he asked Dec, who wondered if "that was even possible".

"Of course it is, we could do it. it's 2020, we're living in the future man. Shall we do it then," Ant told him, to which Dec excitedly replied that he was going to "wear a suit and everything" for the show.

This week's Saturday Night Takeaway will also feature some of the series' most iconic moments - and sounds like one that fans of the show won't want to miss.

Girls With Goals || Her · Ep.161: Feeling Peachy - Sharon Keegan of Peachylean on being an absolute BOSS!
popular
Bride dislocates her leg during her first dance in viral clip
People are sharing why they wouldn't go on Love Island, and their reasons are gas
Goodbye McDreamy! Disenchanted officially wraps filming in Enniskerry
Emilia Clarke is set to be the next Marvel superhero
Jennifer Lopez and Ben Affleck just became Instagram official
Covid-positive man boards flight disguised as wife
Met Éireann issue thunderstorm warning amidst heatwave
You may also like
3 years ago
'I wasn’t sure what was going to happen...' here's the emotional speech Dec gave off-air
3 years ago
Fans think this is who will replace Ant after Saturday Night Takeaway last night
3 years ago
Ant McPartlin's wife shows support for Dec after Saturday Night Takeaway
3 years ago
Fans react to Dec's first solo Saturday Night Takeaway show
3 years ago
Dec says he's rehearsing for SNT alone... prompting a serious response from fans
3 years ago
Ant McPartlin WILL appear on this weekend's airing of Saturday Night Takeaway
Next Page