Yep, bigger than Game of Thrones.

Screen Ireland launched its 2020 slate of forthcoming productions on Friday, with over 40 television, film and animation projects in the works.

Among them; Foundation - a brand new Apple original drama with Jared Harris (recently seen being brilliant in HBO's Chernobyl) and Lee Pace (who you may remember as Ronan the Accuser in the MCU) that is set to become the largest-scale production in Irish history. 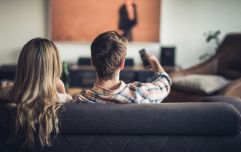 END_OF_DOCUMENT_TOKEN_TO_BE_REPLACED

David S. Goyer (Blade, Batman Begins) will serve as both showrunner and executive producer, while Skydance Television will produce.

Irish company Wild Atlantic Pictures will lead the production, having previously delivered the likes of Black 47 and The Hole in the Ground.

Over 500 production jobs will be created as a result. According to Screen Ireland, several training initiatives are already underway in Limerick - where shooting will commence at Troy Studios - for new entrants into the industry, while Irish talent will be involved behind the scenes.

As for what Foundation is all about? The 10-episode show will chronicle the epic saga of The Foundation; "a band of exiles who discover that the only way to save the Galactic Empire from destruction is to defy it".

If that wasn't enough dystopian sci-fi flavour for you, Foundation is based on Isaac Asimov's novel series of the same name.

Foundation is set to begin production this year.

popular
Penneys has a perfect dupe for Charlotte Tilbury's Flawless Filter foundation
Gemma Owen gets to know Jack Keating as her head turns on tonight's Love Island
Airport outfits are all the rage as we head abroad - here are the 4 best ones
So it seems Ekin-Su once competed as Miss Ireland before Love Island fame
WATCH: The moment dad attacks 3-year-old son's suspected murderer in court
Andrew and Dami both steal a kiss on the terrace on tonight's Love Island
We finally know when summer heat will hit Ireland
You may also like
1 month ago
The iPod has been discontinued
5 months ago
Model issues warning after being tracked with device and followed home
1 year ago
Apple to unveil 217 new emojis, including gender neutral faces
1 year ago
The new iOS 14.5 update will let you unlock your iPhone with a mask on
1 year ago
Apple forced to pay $100 million after admitting they slowed down old iPhones
2 years ago
Apple has banned all vaping apps from the App Store
Next Page