Better Call Saul has been renewed for a sixth and final season.

The final season, which is set to air in 2021, will be made up of 13 episodes - a slight increase from the usual 10-episode seasons.

The news was confirmed during Better Call Saul's panel during the TCA winter press tour this week.

“From day one of Better Call Saul, my dream was to tell the complete story of our complicated and compromised hero, Jimmy McGill — now AMC and Sony are making that dream come true,” Better Call Saul showrunner and executive producer Peter Gould said in a statement [via Deadline].

He went on to thank the fans and the critics for "making this journey possible."

"Next month, we start work on the sixth and final season — we’re going to do our damnedest to stick the landing," he added.

That's right folks, Season 6 will be the final season of #BetterCallSaul. But don't worry... Season 5 is coming in hot for a special two-night event 2.23 and 2.24. #TCA20 pic.twitter.com/8byg5bGqBe 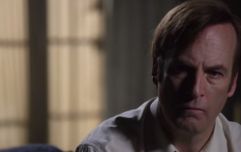 END_OF_DOCUMENT_TOKEN_TO_BE_REPLACED

Sarah Barnett, president of AMC Networks Entertainment Group and AMC Studios, added that "greenlighting a prequel to one of the most iconic series in television history is one of the boldest swings that AMC has ever taken."

“But, thanks to the creative genius of Vince Gilligan and Peter Gould, it has also been one of the most rewarding," she continued. "It has been an absolute joy to collaborate with the extraordinarily talented team on Better Call Saul, which – five seasons in – continues to deliver some of the best storytelling and most beautifully nuanced performances on television today."

Season five is expected to premiere in North America with a two-night event, on February 23 and 24.


popular
This STUNNING €40 Zara dress is all you need to update your wardrobe for summer
The €13 Zara top that comes in four colours will become the most-worn item in your wardrobe
#Covid-19: P!nk and three-year-old son 'really sick' with coronavirus
These €26 Zara trousers are the next best thing to tracksuit pants (and they come in three colours)
The largest family in Britain have welcomed baby number 22
Gemologist predicts that one engagement ring is losing popularity - we're not so sure
So, William and Harry have a step sister... and who knew?
You may also like
3 years ago
Bryan Cranston says he'd love Walter White to appear in 'Better Call Saul'
5 years ago
Irish Breaking Bad Fans - Saul Goodman Has a Message for You
5 years ago
CONFIRMED: Netflix Announce Launch Date for Better Call Saul
5 years ago
‘Better Call Saul’ Trailer Gives Proper Glimpse of Spin-Off
4 days ago
Ant and Dec announce new book to celebrate working together for 30 years
4 days ago
Better mark the calendars, the release date for the Who Wants To Be A Millionaire drama Quiz has been confirmed
Next Page