Better mark the calendars, the full trailer for the Veronica Mars reboot is finally here

The first full trailer for the Veronica Mars revival is finally here - and honestly, we couldn't be more excited.

The cult favourite series aired for three season from 2004 to 2007 on UPN, before it moved to the CW. 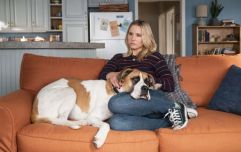 END_OF_DOCUMENT_TOKEN_TO_BE_REPLACED

It was announced last year that the show would be returning for a limited series, with production getting underway just a few months later.

Now, Hulu have shared the first full-length trailer for the upcoming mini-series.

It shows Veronica working as a private detective in her hometown of Neptune, California, and looking into a recent (and high-stakes) crime wave that is trying to “destroy Neptune as a spring-break destination.”

You can check out the new trailer below.

The new series is expected to focus on a serial killer targeting spring breakers in Neptune, with Mars Investigations on the case.

The 8-episode mini-series is set to premiere on Hulu this year, with a number of cast members - including Jason Dohring (Logan), Francis Capra (Eli) and Percy Daggs III (Wallace) - all set to return.

"After Mars Investigations is hired by the parents of one of the victims to find their son’s killer, Veronica is drawn into an epic eight-episode mystery that pits the enclave’s wealthy elites, who would rather put an end to the month-long bacchanalia, against a working class that relies on the cash influx that comes with being the West Coast’s answer to Daytona Beach.”

And while there's a premiere date set for North America (July 26, FYI) there is no word yet on when Veronica Mars will be arriving over here - but we'll keep you posted.

Girls With Goals || Her · Ep.161: Feeling Peachy - Sharon Keegan of Peachylean on being an absolute BOSS!
popular
Emilia Clarke is set to be the next Marvel superhero
Jennifer Lopez just shared a steamy snap of herself and Ben Affleck – and WOW
Bride dislocates her leg during her first dance in viral clip
Sunburned? Eating these 5 foods will help your skin heal from within
The sad reason why viral gymnast, Katelyn Ohashi, isn't on the USA Olympic team
Jennifer Lopez and Ben Affleck just became Instagram official
Goodbye McDreamy! Disenchanted officially wraps filming in Enniskerry
You may also like
2 years ago
The first look at the Veronica Mars revival is FINALLY here
2 years ago
Kristen Bell confirms the news that Veronica Mars fans have been hoping for
2 years ago
The first details about the Veronica Mars revival are here and we can't wait
2 years ago
A Veronica Mars revival is in the works, and we are SO ready
3 years ago
Looks like we're one step closer to a Veronica Mars revival
4 days ago
Love Island's Brad speaks out after Lucinda and Aaron bombshell
Next Page