Bodyguard was one of our favourite TV shows of last year (or this year if you only watched it on Netflix). And don't even get us started on Line Of Duty.

They gripped us to no end and we just couldn't wait to get to the end of both series.

Well, if you loved the aforementioned then you'll be excited to find out that the creator of both TV shows is creating another cold case television drama.

Jed Mercurio is back with his latest offering, named Bloodlands, and we can't wait for it to drop. The drama has been written by Chris Brandon and will be set in Northern Ireland.

It's basically a cat-and-mouse series that will follow police detective Tom Brannick. He finds a suicide note in a car and links it back to an infamous cold case - that has personal significance for him.

James Nesbitt has been confirmed as the lead, and according to Tyla, he said at the Belfast Media Festival today: "It's great to be back making a drama in and about Northern Ireland, which now has a film and television industry as good as any in the world. 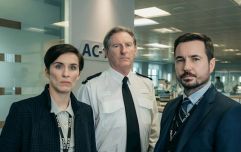 END_OF_DOCUMENT_TOKEN_TO_BE_REPLACED

"We have compelling scripts from a brilliant young writer who was raised in County Down, which are very exciting and psychologically complex. I can't wait to start."

Bodyguard became the most watched drama on the BBC in a decade while Line Of Duty has just been confirmed for a sixth series.

If Bloodlands are anything like those two, we just know we're going to be gripped.

popular
QUIZ: Can you guess the TV series from the intro lyrics?
People are freaking out thinking that their star signs have changed
Will Smith admits to 'failing miserably' in 21-year marriage to Jada Pinkett Smith
Here's what happens on every day of your menstrual cycle (roughly)
There’s A Parasitic Worm That’s Causing Women To Get Pregnant
Someone has ranked the penis size of men from all over the world
15 signs that prove someone is falling in love with you
You may also like
3 months ago
Filming on Peaky Blinders and Line of Duty suspended due to coronavirus crisis
4 months ago
Line of Duty 'reveals the real H' in special episode for Sport Relief
4 months ago
Line of Duty's Vicky McClure is set to star in the 'high octane thriller' Trigger Point
4 months ago
First look at Season 6 of Line of Duty suggests a new character is commanding AC-12’s attention
4 months ago
Line of Duty Season 6 is set to air in Autumn as new plot details are revealed
5 months ago
Martin Compston to star in new thriller from the makers of Bodyguard and Line of Duty
Next Page