Paloma Faith and Boy George had the mother of all rows on The Voice UK.

In scenes which will air on Saturday night, the pair bickered when former Liberty X star Kevin Simm auditioned for the show.

According to The Mirror, when pitching to have Kevin on his team, Boy George said "One thing that I do know is that I understand singers. That's my forte". 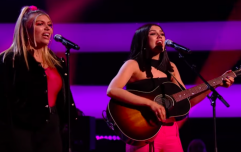 END_OF_DOCUMENT_TOKEN_TO_BE_REPLACED

Paloma pretended to be falling asleep while listening to George and he was NOT impressed, saying "Excuse me Palaver".

She then asked if he was finished and if "it was time to wake up" to which he replied "That's extremely rude. Very rude. Anyway, you're amazing Kevin".

Boy George then taunted Paloma by saying he had hit songs in America and she didn't. Things came to a dramatic end when Paloma went backstage.

Apparently, the row was so tense that BBC bosses had to tone things down to make sure the episode was appropriate Saturday night viewing.

Girls With Goals || Her · Ep.156: 'Beauty Returns' - Rebecca O'Keeffe is BACK and we're talking about viral beauty trends
popular
Palace source says THIS incident on the tour of Australia upset Meghan's staff
Tried and tested: I tried the viral TikTok mascara hack to see if it really works
Why Are Men so Obsessed With Boobs? The Answer is Pretty Surprising...
Here's what happens on every day of your menstrual cycle (roughly)
"I have a name:" Nicola Coughlan wants us to stop talking about actors' weight
The Queen has banned Meghan Markle from wearing any of Princess Diana's jewellery
Meghan Markle's former colleague says she's 'not a person you can be friends with'
You may also like
1 year ago
Kelly Clarkson says her ovarian cyst burst while she was filming The Voice
2 years ago
Niall Horan shares his one piece of advice for aspiring singers
2 years ago
Songbird of our generation? The Voice UK is holding auditions in Dublin this month
2 years ago
Danny O'Donoghue is dating a Brazilian Sports Illustrated model and fair play, like
3 years ago
Jennifer Hudson was shocked by what Olly Murs did on The Voice last night
3 years ago
Olly Murs has 'annoyed' Simon Cowell by joining rival show
Next Page