Have you seen it yet?

If you're anything like us, it's been a busy Christmas of sitting on the couch and doing absolutely feck all... it's quite tiring really. With all the Netflix and chilling over the Christmas period, we're not in the least bit surprised that new reports are showing record-breaking viewing figures for the streaming service, and there's one show in particular which has definitely contributed.

The stats, which were shared by Netflix to Indywire, measure both total viewing hours and average viewing hours per subscriber and were certainly helped by the host of new arrivals to land on Netflix in 2020, including the delightfully scandalous period drama Bridgerton. 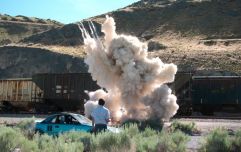 END_OF_DOCUMENT_TOKEN_TO_BE_REPLACED

If you haven't seen the show, created by Chris Van Dusen and produced by Shonda Rhimes, then you're one of a few as it's projected to have reached more than 63 million households so far, making it Netflix’s fifth biggest original series launch of all time. Based on the popular historical romance novels by Julia Quinn, the series tells the story of the Bridgertons, the Featheringtons, and everyone in between as they fall in love, create some scandal, and engage in gossip in high society nineteenth century England.

Irish actress Nicola Coughlan, who plays fan-favourite Penelope Featherington in the hit series, took to her Instagram to express her delight and shock at the news:

Bridgerton is the first Netflix series by Rhimes and Shondaland and considering it's reached the No. 1 spot overall in 76 countries including the U.S., UK, Brazil, France, and South Africa, we're sure it won't be the last. Check out our full review of the series here.

It wasn't just Netflix original series that were blowing people away in 2020, George Clooney’s science-fiction film The Midnight Sky saw an impressive 72 million households tune in which confirms that movies are still a big draw for audiences.

As we embark upon a new year we're excited to see what Netflix has in store and if you're already itching to start planning your 2021 TV calendar; here is everything coming to Netflix in January.

Girls With Goals || Her · Ep.156: 'Beauty Returns' - Rebecca O'Keeffe is BACK and we're talking about viral beauty trends
popular
Gwen Stefani reportedly pregnant with baby number four
A royal insider has revealed the truth behind Meghan and Kate's rumoured feud
The Queen has banned Meghan Markle from wearing any of Princess Diana's jewellery
Meghan Markle's old CV has emerged - and it seems she lies like the rest of us!
7 things we learned from Harry and Meghan's tell-all interview
Palace source says THIS incident on the tour of Australia upset Meghan's staff
A letter to my daughter on International Women's Day
You may also like
2 weeks ago
If you loved The Vanishing at Cecil Hotel, this 2017 documentary will be right up your street
2 weeks ago
Netflix's Behind Her Eyes starring Eve Hewson is your next binge watch
2 weeks ago
Amy Adams' psychological thriller The Woman in the Window is coming to Netflix
2 weeks ago
Simone Ashley cast in lead role for Bridgerton season 2
3 weeks ago
Bridgerton star Regé-Jean Page spotted with footballer girlfriend Emily Brown
3 weeks ago
QUIZ: How well do you remember Angus, Thongs and Perfect Snogging (the movie)
Next Page