This is definitely not the first time the show has done something like this.

Viewers of The Chase were left in awe following a recent episode of the show that included contestants with some of the best names.

The four quiz contestants were Marge, Bart, Maggie and Lisa, aka The Simpsons family, and people are convinced producers did it on purpose.

Fans of the much-loved ITV quiz show quickly took to Twitter in hysterics to praise the show for its casting.

Contestants on The Chase tonight … Marge, Bart, Maggie and Lisa … this must have been done on purpose!? 😂 #thechase #itv pic.twitter.com/l2tzLFQ1xH

"Contestants on The Chase tonight … Marge, Bart, Maggie and Lisa … this must have been done on purpose!?" one person said.

"There's no way these people were randomly picked. Some staff member's a fan," another added.

Aftershow party in Moe’s for Marge, Maggie and Lisa if they beat the Chaser!

"Aftershow party in Moe’s for Marge, Maggie and Lisa if they beat the Chaser! Bart’s writing lines on the blackboard again!" another joked.

END_OF_DOCUMENT_TOKEN_TO_BE_REPLACED

Another person noticed one of the family members was missing.

"How could they not have a Homer in the line up. It's an outrage," one persons wrote.

This is not the first time The Chase has done something like this and it seems to be a bit of a running joke with producers.

Some other hilarious examples include a team of contestants called Gerry, Emma, Mel and Victoria - all the same names as the iconic pop band Spice Girls

Another show also starred a team of Rachael, Ross, Phoebe and Joe - as in the characters from Friends. 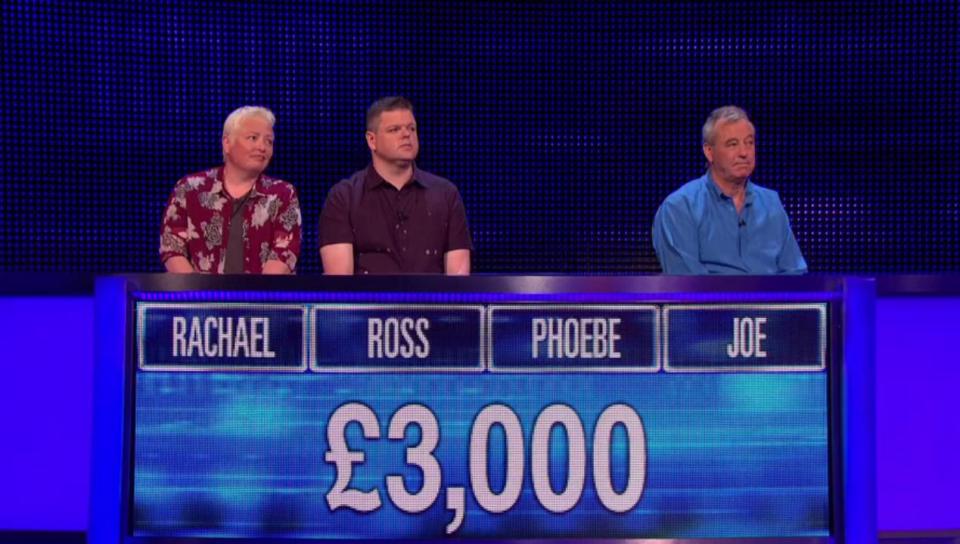 Something that left fans ever more shocked than the Simpsons' names, however, was host Bradley Walsh's  confession a few years ago that he had never seen a single episode of the cartoon, despite over 700 having been broadcast since 1989.

In the episode, which was originally shown in May 2019, the presenter asked one contestant: "The first full episode of what TV animation aired in the US on 17th December, 1989?"

The she correctly chose The Simpsons, Bradley admitted: "Really, 89, wow. Never seen an episode of it. Have you?"

Reminding everyone on Twitter, one fan said: "I bet Bradley 'never seen it' Walsh didn't have a clue what was going on!"

popular
Hang on, Tasha and Coco know each other already?
Reports of image based sexual abuse involving 200 women investigated by Gardaí
Love Island fans think someone has left after Luca arrives back to empty bed
Love Island: Mollie's family issue apology following allergy comments
WATCH: Gemma is left fuming in tonight's Love Island as Luca kisses another girl
Penneys has a perfect dupe for Charlotte Tilbury's Flawless Filter foundation
Love Island fans are fuming after yet another cliffhanger
You may also like
2 weeks ago
There's a modern day version of the Rachel haircut - here's how to achieve it
2 months ago
Tributes pour in for Friends star Mike Hagerty who died at 67
4 months ago
Courteney Cox opens up about ageing and why she stopped 'chasing youthfulness'
4 months ago
Matt Le Blanc splits from Irish girlfriend Aurora Mulligan after six years
6 months ago
SATC could’ve looked very different as Kristin Davis almost played lead role in Friends
6 months ago
Jennifer Aniston walked off set "several times" during emotional Friends reunion
Next Page