The Chase's Jenny Ryan has got a serious set of lungs on her, as per last night's X Factor: Celebrity

The X Factor: Celebrity was on last night for the first time.

Well, not entirely the first time. Way back when the original format of the show was still popular, a celebrity version did air for a brief period.

END_OF_DOCUMENT_TOKEN_TO_BE_REPLACED

Afterwards, Simon Cowell said that he'd never bring back a celebrity edition of the series because it was too inauthentic, and because he wanted to give regular people the chance to become a star.

But hey, trying times call for trying measures and all that.

The first episode of the spin-off talent show aired last night. Featuring a load of lads from Love Island, Ben Foden, and Kevin McHale from Glee, it's probably safe to say that there's an eclectic enough mix of celebrities appearing on the show.

However, it wasn't any of the above that absolutely floored the judges (although Kev was decent, yeah) - it was The Chase's Jenny Ryan, otherwise known as The Vixen.

WATCH: She's gone from the queen of the quiz to singing Queen on the #XFactorCelebrity stage https://t.co/yOgpWJjPyQ #XFactor pic.twitter.com/QftAD1bkrn

Taking to the, ahem, stage out the back of Cowell's Malibu home, the Chaser belted out a rendition of Queen's 'Somebody To Love', surprising just about everybody who assumed her talents couldn't possibly range beyond answering questions on a daytime TV show. 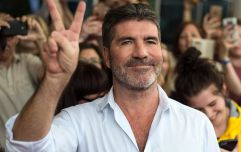 The X Factor will reportedly not be returning in 2020

END_OF_DOCUMENT_TOKEN_TO_BE_REPLACED

Cowell even did his faux wow-did-I-just-hear-that-what-a-note head spin for the benefit of the audience at home and the cameraman on four.

Basically, Jenny was miles better than most other acts we saw last night so sure look, we'll give it to her.

"Wow Jenny where did all that come from?" asked Louis Walsh. "You have just got a great voice."

"Jenny, you were like, 'I don’t really care y’all… Welcome to my back garden'" added Nicole Scherzinger.

Cowell, vacant as ever, dropped in his two cents in the form of a pleasant: "Good for you."

Just glad to be a part of it Simon, right?

The X Factor: Celebrity continues next weekend at 8.30pm on Virgin Media One.

popular
You stars Victoria Pedretti and Dylan Arnold spark romance rumours
Channel 4's Breastfeeding My Boyfriend doc criticised for contributing to stigma
Brian Laundrie parents 'to cremate body with no funeral' amid mystery over cause of death
Viral TikTok shows how to keep warm wearing tights in winter
Late Late Show viewers are not happy with Ryan's questions for Billy Connolly
New period drama A Very British Scandal starring Claire Foy is coming to TV soon
Britney Spears says she want justice after her family hurt her “deeper than you’ll ever know”
You may also like
4 months ago
Louis Walsh is ready to step away from stardom
2 years ago
The X Factor has been cancelled on Sundays, replaced by Catchphrase
2 years ago
Ben Foden says he hopes for ex-wife Una Healy's support ahead of X Factor: Celebrity debut
2 years ago
A scene by scene analysis of the time JLS ruined Christmas for everyone
3 years ago
One the X Factor contestants FELL OFF the stage during the six chair challenge
3 years ago
Yikes! Bruno Tonioli has laid into The X Factor... and it's brutally honest
Next Page