Giri/Haji is the crime drama guaranteed to dominate your autumn TV viewing schedule.

Produced by the team behind Chernobyl, the highest ever rating TV show on IMDB currently, the upcoming series is set in both Japan and the UK.

An eight-part series, it follows Kenzo, a detective living in Toyko who travels to London in an attempt to find his estranged brother who has been reported missing.

However, once in London, Kenzo finds himself helping with a murder case and strikes up a close bond with Sarah, a detective on the Met police force, which could have serious repercussions for his marriage.

Takehiro Hira plays Kenzo while Kelly MacDonald, a familiar face to fans of Boardwalk Empire, takes on the role of Sarah.

"Developing this show with Sister Pictures, Netflix, and the BBC has been an amazing creative experience and now I’m incredibly excited to see it come to life with such a diverse and brilliant cast and crew. They’re all ridiculously talented which has the added bonus of making me look better. Which was my goal all along, frankly". 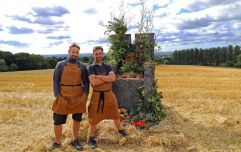 END_OF_DOCUMENT_TOKEN_TO_BE_REPLACED

Casting for the show was first announced back in August 2018, it's due to air on BBC 2 soon before becoming available on Netflix later this year.

It's even been compared to Peaky Blinders and that's a pretty big show of approval when all's said and done.

‘You don’t find a Peaky Blinders overnight.. Giri/Haji could be the next..’ @BBCTwo’s Patrick Holland on the next big drama for #bbctwo #EdTVFest

popular
These sustainable Irish sweaters are making people smile, and they're back in stock tonight!
Aldi to sell reusable face masks from Thursday onwards
Get ready to live like the stars because Lidl is selling an entire home cinema range
A Tyrone midwife was chosen to feature on the cover of Vogue
Love Island will be airing this summer - the Australian version, that is
Here's what you can order on McDonald's new limited Drive-Thru menu in Dublin
Someone has ranked the penis size of men from all over the world
You may also like
2 days ago
Carole Baskin handed control of Joe Exotic’s zoo in Oklahoma following court case
6 days ago
Steve Carrell's Space Force landed on Netflix today, just so you know
1 week ago
Netflix's Sweet Magnolias is the perfect series to bingewatch this weekend
1 week ago
QUIZ: How well do you remember Angus, Thongs and Perfect Snogging (the movie)
1 week ago
The creator of Big Little Lies is teaming up with Netflix for a gripping new thriller
1 week ago
Here is everything that is going to be coming to Netflix in June
Next Page