Coronation Street actor Joe Alessi has teased an exit ahead for his character, Kel Hinchley.

The character arrived in Weatherfield in September, as Corrie began to explore a historic sexual abuse storyline.

Viewers discovered that Paul Foreman had been groomed and sexually abused by Kel - who had been his stepfather when he was a teenager.

Speaking on Lorriane on Friday morning, Alessi said that while it was "open-ended" how long Kel would stick around for, the character was "finite".

"I don't know, I have no idea [how long he will be in Weatherfield for].

"The character I'm playing, it's finite. I'm never going to be a regular on Coronation Street, that's for sure. My role will come to an end at some point." 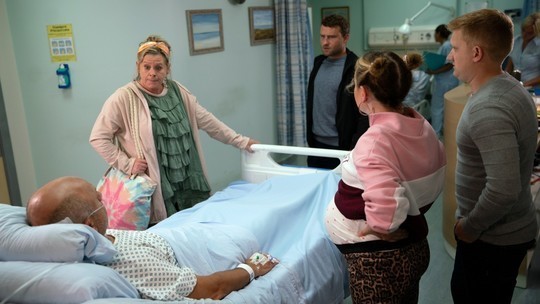 Alessi previously spoke about his initial reactions when he was approached about the storyline, as well as why it was important for Corrie to show it.

"It is a taboo subject but at the same time, in the last ten years, there has been a real culture of openness where people are encouraged to talk about their experiences of rape or male abuse.

"This is why we are doing this storyline, we are doing it to bring it out into the open. It’s more common than we think and as an actor I play the scene as real and as honest as possible, given the storyline.

"Coronation Street is one the greatest soaps in history with huge viewing figures. It is vitally important to bring issues to the wider public so that anybody that may be affected by this storyline will feel more comfortable to get in contact with charities like Survivors Manchester."

popular
QUIZ: How well do you remember The Princess Diaries?
5 absolute essentials for when you're having the gals over for a summer evening soirée
Security footage released of Naya Rivera as search is updated to recovery mission
Know someone from Dublin who is living abroad? They might need this candle
Glossier: A first-time buyers guide to this cult beauty brand
James Franco Has Opened Up About His Relationship With Lana Del Rey
Accents Coffee & Tea Lounge in Dublin has closed its doors for good
You may also like
3 months ago
Real life Corrie couple Sally Carman and Joe Duttine have gotten engaged
4 months ago
Corrie's James Burrows has landed his first role after leaving the soap
4 months ago
Coronation Street star 'in self-isolation' over coronavirus worries
4 months ago
'The hardest goodbye': Corrie's Lucy Fallon pays tribute to Bethany Platt as her final scenes air
4 months ago
Coronation Street's James Burrows shares details about Ali Neeson's exit storyline
4 months ago
Corrie's Ian Bartholomew says it is 'uncomfortable' playing Geoff Metcalfe
Next Page