Coronation Street's Sinead Tinker is reportedly going to be given the chance to participate in an experimental - and possibly life-saving - cancer treatment in Germany.

The Weatherfield resident was diagnosed with cancer earlier this year, soon after finding out that she was pregnant with Daniel Osborne's baby.

She has since been lying to him about going to chemotherapy. Instead, she is trying alternative medicine in an effort to cure the cancer her own way.

The Sun report that she is going to get an unexpected chance to save her life as well as her son's, with an experimental treatment in Germany - one which won't harm her son. 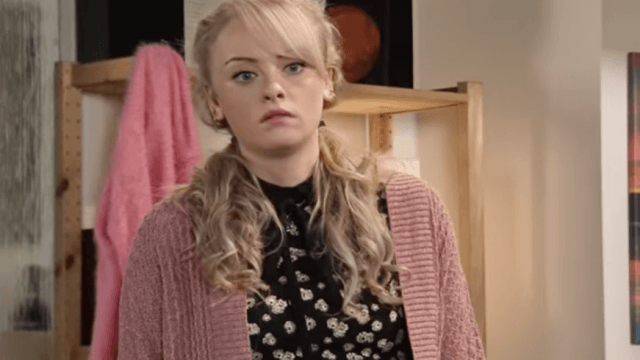 "Sinead has been desperate to protect her baby's life, even if it means putting herself at risk.

"She has refused to entertain anything that has a chance of harming her son so when she is told about the medical trial in German she is over the moon.

However, she is soon offered a lifeline by one of her family members.

END_OF_DOCUMENT_TOKEN_TO_BE_REPLACED

Sinead's aunt, Beth, offers her the money to send her to Germany, but that ends up sending her into a moral panic over how she got the cash.

The Underworld stitcher spots a balaclava in her aunt's home, soon after Dev's shop is raided and the takings are stolen.

"It’s a case of whether she’ll use the stolen cash to save her life and her baby’s," the source added.

popular
Lidl launches own fake tan and it'll only set you back €3.99
There's a Harry Potter themed Airbnb in Roscommon and we just need to visit
Staycation: 7 gorgeous glamping spots for your Irish summer getaway
QUIZ: How well do you remember The Rugrats Movie?
Simon Harris asks people to use their common sense after crowds of drinkers filled the streets at the weekend
The new Covid-19 tracker app is live - here's how to use it
Someone has ranked the penis size of men from all over the world
You may also like
1 week ago
QUIZ: How well do you remember the very first episode of The O.C.?
1 week ago
Leo Varadkar defends use of Mean Girls quote in Covid-19 speech
1 month ago
Carole Baskin handed control of Joe Exotic’s zoo in Oklahoma following court case
1 month ago
PERSONALITY QUIZ: Which Normal People character are you?
1 month ago
'It's just reminded me how rich Sally's books are': Normal People producers on adapting Conversations With Friends during lockdown
1 month ago
'That’s the most honest answer': Skeet Ulrich reveals why he is leaving Riverdale
Next Page