The countdown is on: season two of Homecoming lands on Amazon Prime Video this month

The countdown is on: season two of Homecoming lands on Amazon Prime Video this month.

The critically-acclaimed series will be back on the streaming service on May 22.

Season two will be a “fresh new mystery”, with Janelle Monáe in the starring role. 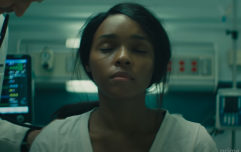 Homecoming season two: Everything we know about the psychological thriller's return

END_OF_DOCUMENT_TOKEN_TO_BE_REPLACED

Her character “wakes in a rowboat adrift a lake, with no memory of how she got there — or even who she is", but it isn't long until she starts to try and get to the bottom of what's happening.

Her ensuing search for identity will lead her into the heart of the Geist Group, the unconventional wellness company behind the Homecoming Initiative.

"I knew something was wrong with me, but I couldn't explain it to anyone," her character says in the trailer.

According to The Hollywood Reporter, Stephan James will be reprising his role as Walter Cruz, while Hong Chau will also be returning as Audrey Temple.

Chris Cooper and Joan Cusack will be joining the series.

Season one of Homecoming is available to watch now on Amazon Prime Video. Season two lands on May 22.

Girls With Goals || Her · Ep.151: 'A Story Shared' - Aoife P. Rafter on blogging during a pandemic and living with CF
popular
"I tried to imagine how we’d heal:" Meghan Markle discusses miscarriage in candid opinion piece
Love Island's Maura Higgins and Chris Taylor are officially together
Princess Diana's brother isn't happy with The Crown's depiction of his sister's marriage
Camilla receiving online abuse following The Crown's depiction of Prince Charles affair
AOC weighs in on Harry Styles' Vogue cover, says he looks "bomb"
Singer Christina Perri shares loss as baby is "born silent"
Zoe Alexander Says X Factor Made Her Look Like a 'Fool'
You may also like
1 year ago
19 thoughts I had while watching Beyoncé's Netflix documentary, Homecoming
1 year ago
Homecoming was just the first of three Beyoncé projects coming to Netflix
1 year ago
Beyoncé opens up about her 'extremely difficult' pregnancy with Rumi and Sir
1 year ago
Beyoncé just dropped a new 40 track live album as Netflix documentary is released
1 year ago
The trailer for Beyoncé's Netflix documentary is HERE and we're beyond ready
3 years ago
Cork mammy's reaction to surprise visit from her daughter is just priceless
Next Page