While we're still waiting for the fifth season of The Crown to drop on Netflix this year, it looks like the crew are already getting their ducks in order for season six.

The sixth and final season of the period drama will explore the royal's more recent history, and according to an inside source, the show are on the hunt for an actress to portray a young Kate Middleton.

END_OF_DOCUMENT_TOKEN_TO_BE_REPLACED

A source told The Sun that featuring the Duchess of Cambridge on the show will be an "easy win" for The Crown, as it will "get more people watching".

The insider added that her inclusion would appeal to viewers "particularly as it will show her relationship with William just as their romance starts to blossom when they were both students".

They did add, however, that it's not a done deal. The sourced noted that the story of Kate and Will meeting at university is "not necessarily a crucial part of the storyline", but that it would be a "bonus". 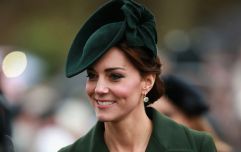 END_OF_DOCUMENT_TOKEN_TO_BE_REPLACED

What's more, they will only include the storyline if the find the right actress to play Kate.

"They’ll only cast someone if they can find the right candidate," the source said.

The next two seasons of The Crown will see Dominic West and Elizabeth Debicki take over the roles of Prince Charles and Princess Diana from Josh O'Connor and Emma Corrin, respectively. Imelda Staunton will take over the role of Queen Elizabeth II from Olivia Colman, Jonathan Pryce will play Prince Philip and Lesley Manville will play Princess Margaret.

Last year, it was reported that West's teenage son Senan had been cast to play Prince William, though this was not confirmed by The Crown. Additionally, reports suggested that they were struggling to find an actor to play a young Prince Harry.