David Harbour has revealed the release date for season four of Stranger Things.

Or, at least, the original release date.

According to Digital Spy, the actor recently took part in a Q&A on Instagram, where he revealed that season four was "supposed to come out early next year, I think, although I don't have authority on this".

But given the coronavirus pandemic, he admitted that this will "probably be pushed back".

Either way, it's definitely good news because there's more Stranger Things on the way (and the wait isn't too far away).

In comes as production on the fourth season of the sci-fi series was suspended earlier this month due to the Covid-19 outbreak.

In February, the streaming service shared the first teaser for the highly anticipated season as they confirmed Hopper's fate.

It looks like it's good news for the 'American'. Well, kind of.

The Duffer Brothers sent fans a message "from Russia with love" on Valentine's Day, as they confirmed the return of the previously-presumed-to-be-dead Hopper. 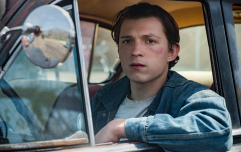 END_OF_DOCUMENT_TOKEN_TO_BE_REPLACED

"We’re excited to officially confirm that production on Stranger Things 4 is now underway -- and even more excited to announce the return of Hopper," they said.

"Although it’s not all good news for our “American”; he is imprisoned far from home in the snowy wasteland of Kamchatka, where he will face dangers both human...and other. Meanwhile, back in the states, a new horror is beginning to surface, something long buried, something that connects everything….

"Season 4 is shaping up to be the biggest and most frightening season yet, and we cannot wait for everyone to see more. In the meantime -- pray for the American."

Alongside the message, they released the first footage from season four of Stranger Things - which also debuts a new look for Hopper...

popular
Selling Sunset's Chrishell Stause reveals "the brokerage has split"
Eight Of The Best Films And Documentaries On 9/11
Kate Middleton has addressed the rumours that she's pregnant with her fourth child
There's a Friends makeup collection coming, featuring Phoebe, Monica, and Rachel palettes
Here's what happens on every day of your menstrual cycle (roughly)
Someone has ranked the penis size of men from all over the world
So apparently Kourtney Kardashian is now dating 20-year-old, Luka Sabbat
You may also like
1 day ago
Selling Sunset's Chrishell Stause reveals "the brokerage has split"
1 day ago
Netflix's Cheer star Jerry Harris arrested on child sex images charge
3 days ago
'You' season three to resume filming this autumn
5 days ago
WATCH: First look at The Trial of the Chicago 7, one of the most anticipated movies of 2020
5 days ago
5 things I learned while binge-watching 'Get Organised With The Home Edit' on Netflix
6 days ago
Here's the top 10 Louis Theroux docs streaming on Netflix right now
Next Page