For the first time, he's about to front Saturday Night Takeaway without his sidekick, Ant McPartlin.

So we reckon Declan Donnelly has more than a few nerves.

Indeed, the TV host took to Twitter on Friday to announce that he was "back in studio..." and the Tweet prompted an incredible 18.5K likes in just a few hours.

Back in studio today preparing your #SaturdayNightTakeaway for tomorrow night. Have a great Good Friday! D x

END_OF_DOCUMENT_TOKEN_TO_BE_REPLACED

Loads of folk chipped in their tuppence worth too. "Good luck Dec, you’ll smash it, everyone is behind you 100 percent," said one. Another went with: "Good luck Dec xx everyone In Newcastle supporting ya... love ya as well u will smash it."

Other messages had similar sentiments, including "Good luck. Sure you’ll do great. Everyone’s backing you," and "I'm so proud of you, Declan. You can do this and we'll all be here cheering you on."

Earlier this week, it was revealed that fans WOULD be given a glimpse of Ant McPartlin in the penultimate episode of SNT - courtesy of the pre-recorded big-budget spin-off, Saturday Knight Takeaway. 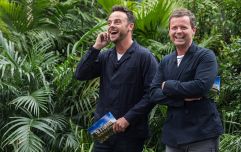 END_OF_DOCUMENT_TOKEN_TO_BE_REPLACED

Dec Donnelly will also be in Florida for the final SNT show on April 7.

On Sunday March 18, Ant McPartlin was arrested on suspicion of drink-driving; he was later charged.

The 42-year-old star was involved in a three-car smash: his Mini hit two other vehicles in south-west London.

Girls With Goals || Her · Ep.161: Feeling Peachy - Sharon Keegan of Peachylean on being an absolute BOSS!
popular
Friends fans spot massive body double blunder in episode rewatch
This wedding hangover kit is going viral on TikTok
Indoor dining return on July 5 could be in jeopardy over Delta variant
The DIY frozen coffee recipe that's so delicious you'll never pay for an iced latte again
Couple who can't agree on child’s name decide to each call her different things
Chris Brown accused of hitting a woman in his home
Here's what happens on every day of your menstrual cycle (roughly)
You may also like
5 months ago
Ant McPartlin is engaged to Anne-Marie Corbett after Christmas proposal
1 year ago
Dec Donnelly has opened up about Ant McPartlin's struggle with addiction
1 year ago
Lisa Armstrong is reportedly making a BIG move in the hopes of a fresh start
1 year ago
Ant McPartlin and girlfriend, Anne-Marie Corbett, have taken a massive step in their relationship
1 year ago
Lisa Armstrong just revealed a new tattoo, and it has a very special meaning
1 year ago
Ant McPartlin back on the road five months before drink driving ban due to be lifted
Next Page