Disney has just released a teaser trailer for Frozen 2, and we're excited

Guys, we are SO excited!

The gorgeous people over at Disney have just released a teaser trailer for Frozen 2. 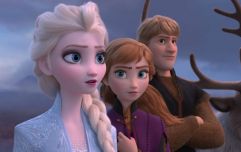 There's a post-credits scene in Frozen 2, in case you want to go watch it again

END_OF_DOCUMENT_TOKEN_TO_BE_REPLACED

In the trailer, we see Queen Elsa attempting to conquer a massive body of water. You know the craic.

The footage didn’t reveal a whole lot in terms of a story line, but it did show Elsa reuniting with some familiar faces, including Princess Ana, Olaf, Kristoff and the lovely Sven.

The sequel is directed by Chris Buck and Jennifer Lee, the same team that handled the original film, which grossed $876m worldwide, and won two Oscars.

So the sequel is in pretty good hands.

The first film was loosely based on Hans Christian Andersen’s The Ice Queen, but few details have been released for Frozen 2.

We're counting down the days folks.

popular
This is how much 91-year-old Queen Elizabeth drinks every day
Simon Harris gives three urgent options for easing restrictions next week
Tributes paid to Limerick based blogger and model Patrick McLoughney
Lidl closing early this weekend to thank staff for hard work
Husband of world champion runner Agnes Tirop arrested over death
Not going anywhere: Baby names set to stay popular for the next decade
Another Strictly star has pulled out of the live show
You may also like
2 years ago
WATCH: Latest trailer for Frozen 2 gives a glimpse at Elsa's new Let It Go
2 years ago
There's a new trailer for Frozen 2 on the way very, VERY soon
2 years ago
YES! We finally have a release date for the sequel to Frozen
3 years ago
Kristen Bell shares a huge update on Frozen 2 and we can't wait
3 years ago
Director of Frozen 2 responds to fans who want Elsa to have a girlfriend in sequel
4 years ago
We finally have a date for the release of Frozen 2
Next Page