Elton John has blasted a Russian film company's decision to cut out gay scenes from his biopic.

A Russian film company called Tass has claimed that it cut certain scenes from Rocketman to comply with Russian laws.

The scenes cut from the movie include a male sex scene and a photograph in the closing credits of Elton John with his real-life husband. 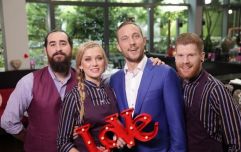 END_OF_DOCUMENT_TOKEN_TO_BE_REPLACED

John has since criticised the film company's decision, describing it as a "sad reflection of the divided world we still live in".

The 72-year-old responded to the news on his official Twitter page, with a statement which said "We reject in the strongest possible terms the decision to censor Rocketman for the Russian market, a move we were unaware of until today.

"We believe in building bridges and open dialogue, and will continue to push for the breaking down of barriersm until all people are heard equally across the world."

You can read his statement in full here:

popular
Deborah James "scared to go to sleep" as she receives hospice care
Final episode of Neighbours to air on Irish TV in August
Irish mum shares "harrowing" experience after kids almost abducted in Turkey
Wagatha Christie: Rebekah Vardy storms out of court just 30 minutes into final day
Tributes paid after Love/Hate actor Stephen Clinch dies aged 52
This Is Us stars say goodbye to show after emotional final episode
Airport passengers left furious as queues stretch all the way to car park
You may also like
1 week ago
McDonald's to exit Russia after more than 30 years in the country
4 weeks ago
Explosions in Transnistria spark fears Ukraine war could be spreading
1 month ago
Up to €400 a month to be offered to Irish households hosting Ukrainian refugees
1 month ago
New images show possible mass graves outside Mariupol as Russian siege continues
1 month ago
91-year-old Holocaust survivor dies in basement during Russian attacks on Mariupol
1 month ago
Almost 6,000 empty homes offered up for Ukrainian refugees
Next Page