A solid nah from all involved.

Noel Edmonds just entered the I'm A Celebrity, Get Me Out Of Here jungle.

He's the highest paid contestant the ITV show has ever had on, after Harry Redknapp, who's the second highest paid.

Unsurprisingly, the two lads have decided to stick together as Noel chose Harry as his advisor, placed a garland on his head, and the pair of them started bossing everybody around.

Emperor Noel has chosen Harry as his Advisor. Which Campmate would you have picked? #ImACeleb pic.twitter.com/fdfAs2UdDx

That was during the trial, where all of the celebrities had to endure some horrible insect-based trauma.

... And it continued well on into the day, as Noel sat perched above the camp, demanding that everyone call him an emperor, and generally just being a bit of a dick.

The campmates weren't all that delighted with Noel's presence... and to be honest, neither were thousands of people watching either.

It was only a matter of time... #ImACeleb pic.twitter.com/L0B130pEc8 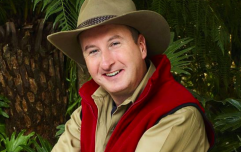 END_OF_DOCUMENT_TOKEN_TO_BE_REPLACED

They took to Twitter to say that they didn't want to see Noel Edmonds in the jungle, that they didn't care that he was supposed to be an emperor, and that simply couldn't abide watching one more second of him being "annoying" and simultaneously "boring."

Their words, not ours.

Essentially, they complained a lot. Here's what they said.

#ImACeleb : “everyone in this camp is so kind and caring, no problems at all”
Noel Edmonds: pic.twitter.com/NeWBye8iPt

So not only have they put an ego like Noel Edmonds in the jungle... they've given him all the power. #imaceleb pic.twitter.com/u4h4hVxdf1

Noel: 'Can I just be really dull and boring?' Well, at least he asked this time... #ImACeleb

Already Noel Is letting it go to is head and annoying the camp mates even before he had entered Camp! get him out! #NoDeal #imaceleb pic.twitter.com/CUG5rhTEy6

Basically, they don't like him and would prefer if he went away soon enough please.

That's looking pretty unlikely though because Noel, as we already mentioned above, is the highest paid celebrity to ever take part in the show, so ITV are absolutely not going to let go of him easily.


popular
Zara's €20 top comes in eleven different colours and it's the cosy comfort we need
Love Island's Maura Higgins opens up the reason behind her split from Curtis Pritchard
Golden retriever Sunny delivers groceries to his owner's neighbour and what a good boy
'You've been great' It looks like Harry and Meghan just shared their final Instagram post
Meghan and Harry issue statement following Donald Trump's Twitter comments
#Covid-19: Life cannot go 'back to normal' after Easter Sunday, says Simon Harris
Check out the €13 Zara bargain that will brighten up your Wednesday
You may also like
2 months ago
Charlotte Crosby says she was lucky if ex-boyfriend Joshua kissed her once a day
3 months ago
Myles Stephenson on what really happened during that off-air chat with Jacqueline Jossa
3 months ago
Jacqueline Jossa says that reuniting with her family was better than winning I'm A Celeb
3 months ago
Andy Whyment says he wants to go back to his 'normal, boring life' after I'm A Celeb fame
3 months ago
Dan Osborne has shared some gorgeous holiday pictures of Jacqueline Jossa and their kids
3 months ago
Robbie Williams wants to 'get paid millions' to appear on I'm A Celeb 2020
Next Page