We finally have the first look at the much-anticipated new film release, Little Women.

Starring Saoirse Ronan in the role of Jo, the all-star cast ensures this is one movie everyone is going to be talking about in the coming months.

Directed by Greta Gerwig, the first trailer for Little Women dropped this evening and already, it's caused a massive stir.

Fans of the classic book want to see if the film can do it justice and movie goers know that it's already tipped for the Oscars, such is the hype around it.

This Christmas, own your story. ? Watch the new #LittleWomenMovie trailer now. pic.twitter.com/Nm2x2uqyou 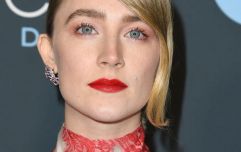 END_OF_DOCUMENT_TOKEN_TO_BE_REPLACED

Due to land just in time for the festive season, this is one cinema trip you'll be planning weeks in advance.

No plot spoilers here but as those who adore the book will know, it's a coming-of-age tale that brings with it moments of great sadness and joy.

popular
Paul Mescal wore O'Neill's shorts while carrying cans of pink gin so I bought O'Neill's shorts and cans of pink gin
Britney Spears has gifted us a new song, securing her status as a true lockdown icon
This amazing hanging egg chair is coming into Aldi next week and go, go go (but safely)!
After days of silence, Scott and Sofia finally comment on the break up rumours
Women and girls struggling with access to period products during #Covid-19, research shows
Her Quarantine Quiz Week 9: Iconic Irish music videos
Cristiano Ronaldo has been called 'racist' for his latest Instagram post
You may also like
7 months ago
The first reactions to Greta Gerwig's Little Women are here
2 years ago
Meet the cast of Little Women, your next must-see show
1 week ago
PSA: the original Buffy the Vampire Slayer is returning to the television
1 week ago
ATTENTION: Angus, Thongs, and Perfect Snogging is dropping onto Netflix next month
1 week ago
"What, like it's hard?" Mindy Kaling confirmed as co-writer of Legally Blonde 3
1 week ago
Finally! The Sinner season 3 is arriving on Netflix this June
Next Page