It could be a LOT worse.

There's no doubt about it: the details of Game of Thrones' eighth and final season are some of Westeros' most closely guarded secrets in just about forever.

With a few months still to go until the last six episodes of the HBO epic kick off, fans have become more and more eager to find out whatever information they can about what is going to to happen.

They've also been analysing (and overanalysing) the information about the season that has been shared.

The latest tidbit causing a stir? The first glimpse at footage from Game of Thrones' last season.

Earlier this week, HBO released a blink-and-you'd-miss-it look at Game of Thrones' upcoming final season (right around the 38 second mark).

It featured Daenerys arriving at Winterfell, alongside Jon Snow, where she is greeted by a not-to0-thrilled-looking Sansa Stark.

“Winterfell is yours, your grace,” Sansa tells the Mother of Dragons, which led many fans to believe that the eldest daughter of Ned and Catelyn Stark had just...handed over Winterfell.

And they weren't too happy about it.

Jon: We gonna give Winterfell to Dany

ok but why would sansa give winterfell up so easily like ,?? i don’t trust this

After everything Sansa’s been through, she’s going to just give up #Winterfell? #Nope ☠️🐺 #GoT pic.twitter.com/lLzkUXBiWh

My girl Sansa didn’t win back Winterfell just to give it up to Daenerys. #GameofThrones pic.twitter.com/MHYcOjbqlo 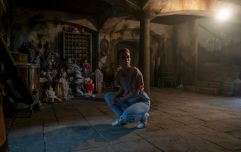 END_OF_DOCUMENT_TOKEN_TO_BE_REPLACED

However, some fans were quick to point out that Sansa wasn't actually giving Dany Winterfell - despite it sounding that way (and Dany probably interpreting it that way).

It sounds like it was meant to be more of a hospitable, greeting thing - like when Ned greeted Robert Baratheon in the very first episode.

Although Sansa's 'greeting' sounded a lot colder than Ned's, so maybe there's something else going on...

popular
10 Dublin restaurants with outdoor areas we'll be hitting up for the next 3 weeks
Tried and tested: 3 sheet masks that seriously impressed me
Sir David Attenborough has officially joined Instagram and we couldn't be happier
"She's already changed our world" Gigi Hadid and Zayn Malik welcome baby girl
WATCH: Simone Biles just did a triple backflip, a move not even recognised in women's gymnastics
James Franco Has Opened Up About His Relationship With Lana Del Rey
Here's what happens on every day of your menstrual cycle (roughly)
You may also like
4 days ago
The Pursuit Of Love is period drama that will be your next TV obsession
4 days ago
4 new additions to Netflix to spend your weekend watching
5 days ago
Oy with the poodles already! Alex and Ani have released a Gilmore Girls collection
1 week ago
Here’s who’s on the Late Late Show tonight
2 weeks ago
Gogglebox Ireland returns to TV tonight and there's some new faces!
2 weeks ago
Irish Women in Harmony will be on tomorrow night's Late Late Show
Next Page