The father of Westeros has one major niggle when it came time for someone else to make their vision of his creation.

For the most part, Game Of Thrones author George R. R. Martin has been quietly positive of HBO's adaptation of his series of novels, but while talking to Time Magazine, he discussed the one major difference that he wasn't a huge fan of (SPOILERS, obviously):

"At some points, when (showrunners) David [Benioff] and Dan [Weiss] and I had discussions about what way we should go in, I would always favour sticking with the books, while they would favour making changes."

"I think one of the biggest ones would probably be when they made the decision not to bring Catelyn Stark back as Lady Stoneheart. That was probably the first major diversion of the show from the books and, you know, I argued against that, and David and Dan made that decision.”

Yep, in the books, the mother of the Stark clan, who was killed off with most of her surviving family in The Red Wedding, comes back from the dead (sorta), and fans of the books had been awaiting since her death for her return.

There had even been constant hints by those in the show of her imminent return, when Cersei herself (Lena Headey) posted a pic on Instagram, of a series in rocks in - yep, you guessed it - the shape of a heart. 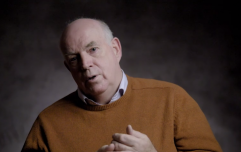 In tonight's Finné, Martin Ridge tells the story of how he uncovered the clerical sex abuse in Donegal

END_OF_DOCUMENT_TOKEN_TO_BE_REPLACED

But from the sounds of it, no matter how much we might want it, it doesn't look like this is a plot-line we'll be getting, as Martin continued:

"In my version of the story, Catelyn Stark is re-imbued with a kind of life and becomes this vengeful wight who galvanises a group of people around her and is trying to exact her revenge on the Riverlands. David and Dan made a decision not to go in that direction in their story, pursuing other threads. But both of them are equally valid, I think, because Catelyn Stark is a fictional character and she doesn’t exist. You can tell either story about her."

In other Martin/GoT news, he took to his Livejournal account this weekend to put to rest all of those rumours about his next chapter in the Games story, titled The Winds Of Winter, which folk have been saying is either (A) Completely finished but he's sitting on for some nefarious reason, or (B) He hasn't even started writing yet:

"Both ‘reports’ are equally false and equally moronic. I am still working on it, I am still months away (how many? good question), I still have good days and bad days, and that’s all I care to say. Whether WINDS or the first volume of FIRE AND BLOOD will be the first to hit the bookstores is hard to say at this juncture, but I do think you will have a Westeros book from me in 2018… and who knows, maybe two. A boy can dream…"

Fire And Blood, by the way, is Martin's prequel series to Game Of Thrones, telling the history of the Westeros and the Targaryen reigns, and will be divided into two volumes, the first of which is apparently pretty much finished, and will be out... well, whenever Martin feels like it.


popular
Zara's €20 top comes in eleven different colours and it's the cosy comfort we need
These €26 Zara trousers are the next best thing to tracksuit pants (and they come in three colours)
Check out the €20 New Look bargain that's just too good to miss out on
Vogue Williams and Spencer Matthews' reality TV show has reportedly been cancelled
What the hell is going on with Houseparty?
The salted crème egg fudge recipe that is the perfect Easter treat
Season 16 of Grey's Anatomy begins in Ireland tomorrow night and the excitement is real
You may also like
8 months ago
Dee Woods: Don't take away my Home and Away you flamin' galahs!
9 months ago
Every character from Saved By The Bell, ranked from worst to best
10 months ago
ATTENTION: All Sky customers to get free box sets from tomorrow
11 months ago
Sony reveal 16K television that is as tall as a giraffe
1 year ago
The trailer for HBO's Chernobyl mini-series is absolutely chilling
1 year ago
It's official: the stupidest EVER moment on The Chase has finally happened
Next Page