A Greta Thunberg documentary is in the works

The climate activist's work to date will be presented in a new documentary, set to air next year.

2019 has been a huge year for Greta Thunberg.

The 16-year-old Swedish climate activist was recently named as TIME's Person of the Year, becoming the youngest recipient in history of the magazine's award. 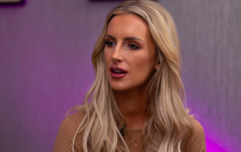 A BBC documentary on the Peru Two is coming next month

END_OF_DOCUMENT_TOKEN_TO_BE_REPLACED

In Thunberg's campaign against climate change, she has addressed heads of state at the United Nations, met with the Pope, gone toe-to-toe with the President of the United States and inspired millions of people to join the global climate strike that took place on 20 September; the largest climate demonstration in human history.

Thunberg's powerful speech aimed at the UN remains one of the most iconic moments of the year.

As such, it makes perfect sense that a documentary crew might want to get involved.

Deadline reports that Hulu will air an original documentary set to premiere in 2020 with a working title of Greta.

The team focusing on Thunberg has done so from her early school strike in Stockholm to the world stage, capturing footage during every significant step.

Thunberg has proved to be a notably divisive figure, drawing both criticism and adulation on her journey thus far.

popular
Liveline listeners call for RTÉ's new property show to be scrapped
Negative Covid tests will be required to enter Ireland, Cabinet agrees
Father and daughter stabbed to death in London
Pantos can go ahead this Christmas but don't bring the children – Health Minister
14-year-old boy charged with murder of 12-year-old Ava White
Andrew McGinley receives messages of support from RTE staff after cancelled interview
Millie Mackintosh welcomes second child with Hugo Taylor
You may also like
1 year ago
Netflix's American Murder: The Family Next Door dubbed "terrifying" and "disturbed" by viewers
1 year ago
Watch to educate: 8 shows and movies that depict racial injustice against black people and the fight for equality
1 year ago
Here's a list of some of the amazing Sky documentaries coming up
1 year ago
The story behind Netflix's latest true crime documentary is absolutely off-the-wall bonkers
1 year ago
BBC's new true crime documentary examines one of the most shocking cases of recent times
2 years ago
Netflix's jaw-dropping new documentary examines 'one of the cruellest people who ever existed on Earth'
Next Page