This will be our second helping of The Late Late Show this week, and Ryan will be focusing on Gay Byrne once again.

Tough decisions to be made tonight, made all the easier by the invention of live-recording, so we'd reckon you'll want to watch one, and then immediately go watch the other one.

First up is The Late Late Show, which starts at 9.35pm on RTÉ One.

END_OF_DOCUMENT_TOKEN_TO_BE_REPLACED

After the passing of Gay Byrne earlier this week, there was a special episode of The Late Late Show shown on Tuesday in his memory, and tonight's episode will dedicate another portion of the show to its former host.

On top of that, the guests this week include Samantha Power, who will be talking about her time as a US Ambassador under President Obama, and the impact President Trump has had on the world since he moved into the White House.

Activist Sinéad Burke is discussing her dealings with everyone from Victoria Beckham to Meghan Markle, and her want to create a world in which nobody is excluded.

Tipperary-born entrepreneur Declan Kelly, CEO of Teneo, will talk about Global Goal Live, an attempt to end world poverty, which will include assistance from the likes of Coldplay and Pharrell Williams. 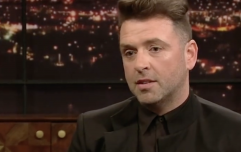 END_OF_DOCUMENT_TOKEN_TO_BE_REPLACED

As if all of that wasn't enough, the Irish Women's Hockey Team will be in studio to chat about their recent win and qualifying for next year's Olympic Games, the 2 Johnnies will be bringing their brand comedy to the couch, and Rachel Coyne will be the musical guest for the evening.

Then we've got The Graham Norton Show, which kicks off at 10.35pm on BBC One.

Oscar-winner Olivia Colman and Oscar-nominee Helena Bonham Carter will be hitting the red couch to chat about their roles in the latest season of The Crown.

They'll be joined by Chadwick Boseman, who will be on hand to discuss his new action-thriller 21 Bridges, as well as Richard Ayoade, who is talking about his new Channel 4 documentary series Travel Man.

And for the musical guest, it is Ireland's own Niall Horan, performing his new single 'Nice To Meet Ya', which is pretty catchy, if we do say so ourselves...

popular
Lauren Goodger assaulted and taken to hospital after baby girl's funeral
Netflix about to unleash new dating show with extremely weird twist
Tasha's dad responds to Jacques' Instagram video
Everything we know about the Love Island reunion
Barry Keoghan and girlfriend Alyson welcome their first child together
Artist Audrey Hamilton: "Fast fashion was something we didn't want to be a part of"
These baby names are set to be popular in 2030 (so maybe get in there now!)
You may also like
3 months ago
Ryan Tubridy is refusing to comment on age after Jamie-Lee O’Donnell interview
3 months ago
James Corden announces he's leaving The Late Late Show
3 months ago
Ryan Tubridy already asked Jamie-Lee O'Donnell about her age in a different interview
3 months ago
Marty Morrissey gives heartbreaking account of mum's death following a crash on the Late Late show
4 months ago
"I have a lot of energy to burn": Michael Bublé on fatherhood, fandoms, and being fire on TikTok
4 months ago
Ryan Tubridy reveals the emotional moment that happened backstage after Ukraine appeal
Next Page