Guy Fieri is known of course as one of the Food Network's best-loved personalities. The chef, best known for Diners, Drive-Ins and Dives is notorious for his excessive and outlandish love of all things barbecued and fried.

The chef and TV personality will be hosting a Super Bowl Party on February 7th and the buffet costs a whopping $700 per person. But judging by the sheer extent of the menu on offer, it almost seems worthwhile: 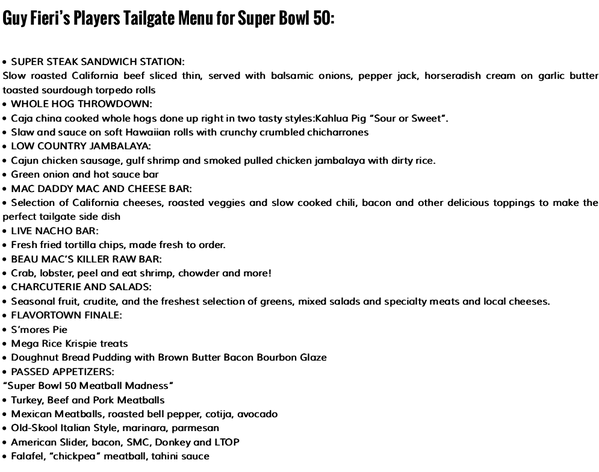 There will be an ENTIRE BAR devoted to Mac and Cheese, and obviously pigs on spits because this is AMERICA.

Fieri  owns several restaurants, including one called Tex Wasabi's which is a hybrid of Mexican and Japanese food (sounds interesting), and Johnny Garlic's which is the best name for a restaurant we have ever heard. I'm opening one called Barry Onion's.

Tickets are selling fast, so get in now if you want to actually feel your arteries clog in real time!


popular
The flattering €16 Penneys dress we'll be wearing every day for the foreseeable future
Family of Love Island's Mike Boateng release a statement regarding publication of 'false stories'
Johnny Ward and former dance partner Emily Barker are officially a couple
Met Éireann issue low temperature weather warning for 25 counties
Tried and tested: I got my eyebrows laminated, and I'm absolutely weak for myself now
The €30 New Look skirt we're going to be living in for the next few weeks
These €30 Zara heels are seriously comfortable and you know they're going to sell out
You may also like
2 days ago
Three-part documentary series about the death of Jeffrey Epstein is being made
2 days ago
Here's the lineup for this week's Graham Norton Show
3 days ago
US TV network reportedly in talks for a second season of Dublin Murders
5 days ago
There's a new period drama from the creator of Downton Abbey on the way
5 days ago
Derry Girls creator says movie is 'definitely something we're talking about' and reveals first details of Season 3
1 week ago
WATCH: First Dates Ireland returns tonight and viewers are in for a treat (especially Westmeath fans)
Next Page